Nov 3, 2016 11:51 AM PHT
Agence France-Presse
Facebook Twitter Copy URL
Copied
Murray aims to end Djokovic's reign atop the rankings, but is pushed to the limit by Fernando Verdasco 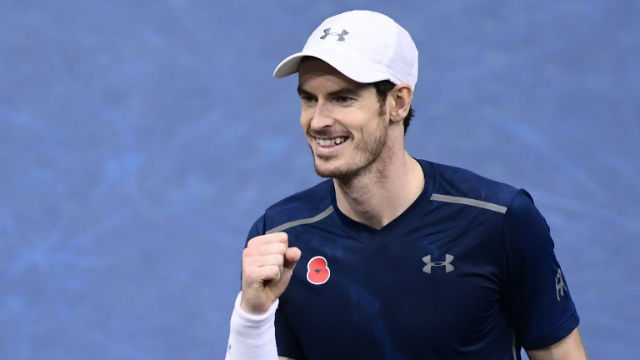 PARIS, France – Andy Murray laboured past a determined Fernando Verdasco to reach the last 16 of the Paris Masters on Wednesday, November 2 (Thursday morning in Manila) and keep the pressure on world number one.

The second seed raced through the opening set but was forced into a decider after Verdasco, who had lost in the first round in 5 of his past 6 tournaments, levelled in a tie-break.

The Spaniard then saw two break points pass him by at 5-all in the third set, with Murray breaking the following game to finally end Verdasco’s resistance.

“It wasn’t the best match from my side. I got through it. I will play better tomorrow,” said Murray after sealing his 70th win of the season.

“I didn’t get any time on that court, because matches are from 11:00 in the morning and guys have warmup. So I have hit for like 45 minutes on the court beforehand, and it’s very different to last week, very different conditions.”

Murray, a winner in Beijing, Shanghai and Vienna in his past 3 events, will continue his assault on Djokovic when he faces Lucas Pouille for a place in the quarter-finals.

Djokovic, the record 4-time champion, marched into the third round with a 6-3, 6-4 victory over Luxembourg’s Gilles Muller.

The Serb needed 4 set points before claiming the opener, with Djokovic then breaking at 4-all in the second to extend his Paris winning streak to 16 matches.

“It was great to start off the way I did today,” said Djokovic.

“Not an easy opponent, definitely, because he serves and volleys, and I found the conditions quite quick, quicker maybe than they have been last year.

“But nevertheless, I think I managed to find the right rhythm, right pace from the very beginning.”

Djokovic – winner of the last 3 editions of this tournament – will meet 14th seed Grigor Dimitrov on Thursday.

The 29-year-old must reach the final in Paris to guarantee he extends his stay at number one with Murray rapidly closing in on the Serb.

World 91 Struff will face America’s John Isner for a place in the quarter-finals.

Dominic Thiem faces an anxious wait to see if he qualifies for the World Tour Finals in London after slumping to a 6-2, 6-4 defeat against Jack Sock.

Thiem entered this week’s tournament occupying one of the final two qualifying spots for London, but his second-round exit has left his place in the 8-man field vulnerable.

The Austrian dropped his opening service game against Sock, setting the tone for a dismal afternoon as the American blew away the sixth seed in under an hour.

Thiem has won 4 titles this season and reached the semi-finals of the French Open, but his subsequent dip in form could prove costly with 5 players still fighting for the remaining two London berths.

Marin Cilic, a winner in Basel at the weekend, further bolstered his chances of playing at the November 13-20 event by defeating compatriot Ivo Karlovic 7-6 (9/7), 6-2.

With Rafael Nadal calling an early end to his season, the Croat is eighth in the Race to London standings and will face David Goffin for a place in the quarter-finals.

However, Roberto Bautista Agut’s London bid ended as the Spaniard squandered 3 match points before going down 2-6, 6-1, 7-6 (8/6) to Gilles Simon.

The Frenchman plays Tomas Berdych next with the Czech looking to return to the Tour finals for a seventh straight year.