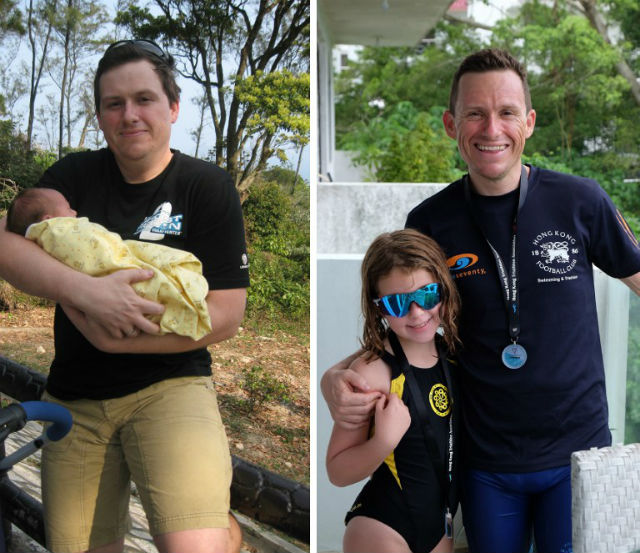 HONG KONG, China – Weighing in at 120 kilogrammes (265 pounds), a smoker and drinker revelling in Hong Kong’s hedonistic expat scene, David Gething was heading for a heart attack by his 40th birthday.

He could so easily have ended up a health statistic, another casualty of the city’s excesses, he says. Instead he funnelled his energy into sport – and ran right into the record books.

Aged 41, Gething has two world marathon records under his belt and has just released a book about his racing adventures, Relentless.

But it was a different story less than a decade ago.

“Being an expat opens a lot of doors, and you can get away with a party lifestyle you’d never imagine even existed back home,” he tells AFP.

“But nothing comes without a price, and that lifestyle can certainly get you into trouble.”

Gething, now a lithe 67 kilos, pinpoints the moment his life changed, crediting his wife with sitting him down ahead of their first child’s birth and delivering some brutal, but necessary home truths.

He recalls: “She asked me if this was what what I wanted my daughter to look up to and emulate?

“With those few words, that wall of self-denial came crashing down. I was 32, I’d seen myself as a fun, party guy, but with my wife’s honest assessment I saw I was more like the guy well on his way to a heart attack.”

He stopped smoking and the next day signed up for a 250 kilometer (155 mile) 6-day ultramarathon in the Gobi Desert.

“I’d never run 5 kilometer before, never mind a marathon. It sounded ludicrous, but I needed something that would scare me enough to make sure I didn’t get lazy or give up,” he adds.

A vet by day, he had a year to train, and started cycling before building up to running.

“Running was too tough when I was that out of shape. It certainly wasn’t any kind of magic transformation, and I wasn’t naturally fit. But little by little I did get better,” he says.

To his astonishment he not only completed the ultramarathon, he enjoyed it and cast about for a fresh challenge, taking on triathlons, marathons and Iron Man competitions around the world.

Yet he still wanted more.

“I definitely have an addictive personality,” he says.

“It took me until thirty-something to realise that, and to understand that personality had to be directed into constructive efforts rather than destructive ones.”

Last year he took on the World Marathon Challenge, running 7 marathons on 7 continents in 7 days.

He lost part of his toes to frostbite running in Antarctica and suffered a fractured ankle racing in Africa, but went on to beat the 11 other competitors to win the overall title.

Instead of a heart attack before his 40th, he set a new world record for the fastest marathon in Antarctica with a time of 3.21:35 secs, and another for his cumulative time of 25.36:03 across the races.

“It was an amazing experience.The marathon I enjoyed most was Antarctica. I didn’t really have much experience of cold-weather climates, in fact I’d never seen it snowing before in my life. But just seeing the vast icy whiteness, completely devoid of life, was stunning.”

Gething believes success at long distance or endurance races is largely down to mental toughness and mind games.

He says: “I focus on small things. Get to the next water stop. Get over that hill. Soon enough these add up into big stretches of the race, and before you know it you’re getting towards the finish.

Food too has played a role. Gething has all but given up red meat, eating a mainly plant-based diet and fish when training hard but opting for a vegan diet the rest of the time.

There are other sacrifices. He wakes at 4:30 am to train for a few hours before the school run and work and is often in bed by 8 pm.

Happily married with two children, Gething has little to regret. He runs a successful veterinary business and his racing has taken him everywhere from North Korea to Hawaii.

But he admits to wondering what might have happened if he had focused on sport earlier.

He dismisses the idea that he might have had Olympic glory but is fascinated by the elite marathon runners wavering at the edge of a sub-two hour marathon.

Kenya’s Dennis Kimetto currently holds the world record for a standard marathon at 2.02:57, as debate rages over whether it is possible for humans to run faster.

Gething says: “We’re so close it’s nail-biting. You break it down and that’s 178 seconds. Over 42.2 kilometers. Someone just has to be able to run four seconds a kilometre quicker than Kimetto. That’s got to be possible.”