Magdaleno on Donaire: ‘We’re gonna rip his head off’ 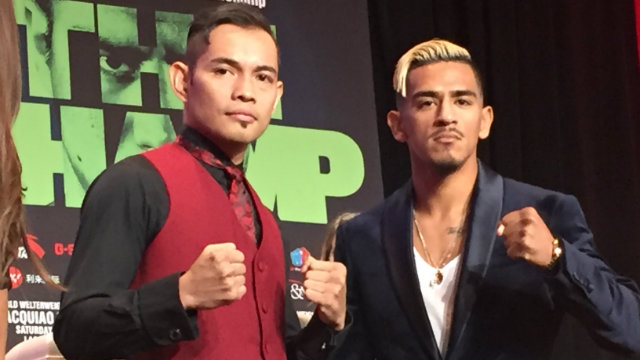 LAS VEGAS, USA – Undefeated contender Jessie Magdaleno isn’t lacking for any confidence ahead of his challenge of WBO junior featherweight champ Nonito Donaire Jr as he promises to “rip his head off” when they fight on Saturday, November 5 (Sunday Manila time).

Magdaleno (23-0, 17 knockouts) of Las Vegas addressed the media at the press conference for the Manny Pacquiao vs Jessie Vargas undercard sporting a bleached blonde hairdo and dismissed questions about his resume.

“Everybody is questioning my experience, who I fought. It doesn’t matter who I fought, who I’ve been in the ring with. I worked my butt off for this fight. I’m more than ready,” said the 24-year-old Magdaleno, the mandatory challenger with the WBO.

Despite building an unbeaten record since turning pro in 2010, the southpaw Magdaleno has faced no fighters of note at the contender level. Donaire (37-3, 24 KOs), though 10 years older, will be a significant step-up in competition for Magdaleno. The Filipino-American Donaire has won world titles in 4 weight classes and is coming off a third round knockout of Zsolt Bedak in his first title defense this past April. (READ: Nonito Donaire stands as his own man on first Pacquiao card)

“There’s nothing more that I can say, I hope he comes with his A-game because we’re gonna rip his head off for this one.”

Donaire, for his part, laughed off the talk at the press con. – Rappler.com