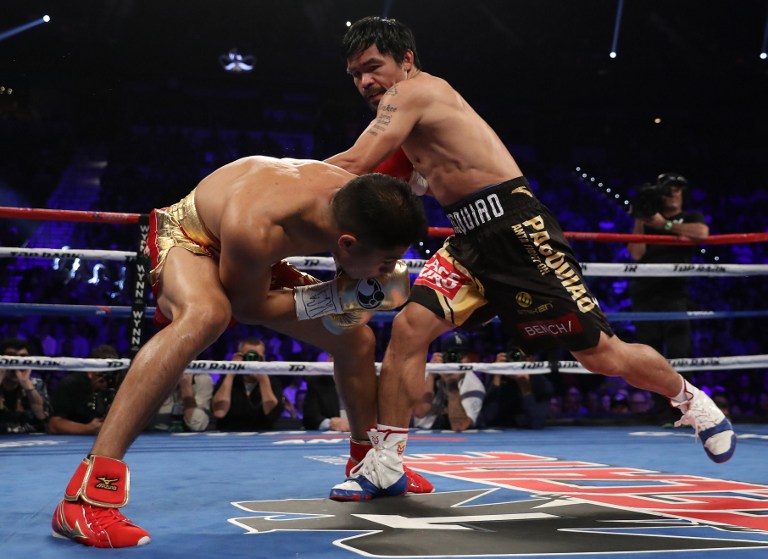 The Fighting Senator regained the WBO welterweight title with a one-sided decision win over Jessie Vargas after ending a brief retirement to run for political office. The scores were 114-113 and 118-109 on the other two cards for the General Santos City, Philippines native.

Pacquiao (59-6-2, 38 knockouts) dropped Vargas in round 2 with a lightning quick left hand counter left, the first time the 27-year-old from Las Vegas had ever been knocked down in a professional fight.

Despite having nothing to prove, Pacquiao had much to gain with Floyd Mayweather Jr at ringside eyeing a potential rematch. Pacquiao lost a unanimous decision to Mayweather (49-0, 26 KOs) in May of 2015, and hasn’t fought since September of that year after announcing his retirement. A rematch with Mayweather, though perhaps not as lucrative as their record-setting first fight, would still be the biggest payday available in the sport.

Pacquiao, 37, continued to be the quicker fighter through the first 5 rounds before Vargas (27-2, 10 KOs) found the range with his right hand. It was the same shot which nearly knocked out Timothy Bradley Jr in his lone prior defeat and the blow which won him the vacant title in March with a knockout win over Sadam Ali.

Vargas landed several of his power shots in that stanza, slowing Pacquiao’s aggression, if only for the moment.

With the fight seeming to slip away, Vargas hit Pacquiao with a right hand so hard that it popped his face straight up towards the ceiling. Pacquiao recovered quickly and strafed Vargas along the ropes, and by the end of the round had Vargas bleeding from a cut over his left eye. The former junior welterweight titleholder Vargas never stopped trying, but was not competitive for the final 3 rounds, missing wildly on several occasions as his field of vision diminished.

“I’m very careful to go inside because I know he will counter me,” said Pacquiao. “I feel I can do more but every round is to try and knock him out.”

When asked afterwards whom he wanted to face next, Pacquiao answered in typical fashion, deferring it to his promoter.

“I don’t know, whoever the people want me to fight. I am not picking an opponent. Whoever my promoter gives me I will fight,” said Pacquiao.

Vargas will be comforted by the career-high payday of $2.8 million he is set to earn for this fight, while Pacquiao’s purse will be determined primarily by the revenue generated for the fight, according to promoter Bob Arum of Top Rank.

“His speed surprised me at the beginning and that woke me up,” said Vargas.

“We are only improving. I apologize if I let you down but I tried my best and we are only getting better.  Fighting Pac only elevated my game and it makes me better,” Vargas added.

Pacquiao did not attend the post-fight press conference as he had 16 stitches administered to a cut he suffered in the final round. Arum announced the attendance as 16,132.

The fight was Pacquiao’s first at the Thomas & Mack Center since his two knockout victories over Erik Morales in their second and third meetings in 2006.

On the undercard, Nonito Donaire Jr lost his WBO junior featherweight title with a unanimous decision defeat to unbeaten southpaw Jessie Magdaleno by the scores of 116-112 on two cards and 118-110 on the third. – Rappler.com