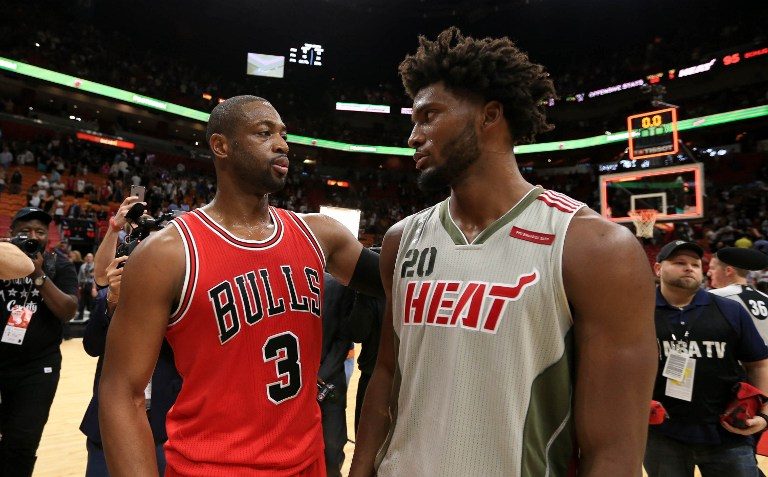 MIAMI, USA – Dwyane Wade made two clutch free throws in the final seconds to help lift the Chicago Bulls to a 98-95 win over his former team in his first game back in Miami.

Wade spent 13 seasons with the Heat before joining his hometown Bulls on a two-year deal worth an estimated $47 million. His return to Miami on Thursday night marked his first visit to AmericanAirlines Arena since his departure.

Wade finished with 13 points, 7 rebounds and 4 assists in 32 minutes of playing time. But his two free throws with 13 seconds left on the clock helped seal the victory for the Bulls in front of a crowd of 19,600.

Jimmy Butler had 20 points and Robin Lopez and Rajon Rondo added 16 points each as the Bulls improved to 5-4.

Hassan Whiteside led Miami with 20 points and 20 rebounds. It was his sixth double-double in seven games this season.

Heat point guard Goran Dragic injured his left ankle in the third quarter when he came down on the foot of Chicago forward Doug McDermott. Dragic did not return and finished with six points and four assists in 22 minutes.

The teams were so closely matched through three quarters that they even had the same shooting percentage – 41.5 percent on 27-for-65 from the floor.

In Milwaukee, Anthony Davis scored 30 points as New Orleans won for the first time this season, beating Milwaukee Bucks 112-106 at the Bradley Center.

He scored 12 of his points in the fourth quarter for the Pelicans, who shot 43.8 percent from the field.

The Pelicans dropped their first eight games of the season. – Rappler.com