Nathanielsz had been in intensive care at Mills-Peninsula Medical Centers in Burlingame, California since Thursday, November 3 after suffering a heart attack while en route to the boxing card headlined by the Manny Pacquiao vs Jessie Vargas WBO welterweight title fight in Las Vegas, which he was set to commentate two days later.

The news was first reported by ABS-CBN and confirmed to Rappler by Nathanielsz’s daughter Rachael Nathanielsz.

“Told him yesterday that if he wants to let go already, just come home to Jesus,” said Rachael Nathanielsz. “He would always tell me ‘I’ve lived a full life.'”

Born in Sri Lanka, Nathanielsz moved to the Philippines in 1962 and became a naturalized Filipino citizen in 1973 by means of presidential decree number 192 from then-president Ferdinand Marcos for “his long and continuous service to the Filipino people in the field of journalism.” Nathanielsz greeted friends by calling them “partner” and made his name in boxing and basketball but was also personally fond of cricket.

Nathanielsz’s accent became immortalized as the backing soundtrack to Pacquiao’s earliest fights, which he commentated for the Blow by Blow program. He had most recently been a member of ABS-CBN’s commentary panel for their “Pinoy Pride” boxing series. He also kept an extensive library of Filipino boxing matches, including rare videos of Elorde, a long-time friend of his.

In recent years Nathanielsz had championed the cause of the underreported world of Filipino boxing, tirelessly churning out stories on boxing fights big and small. He was also not shy about expressing how he felt through social media, firing away with his views on anything and everything he viewed as unjust. 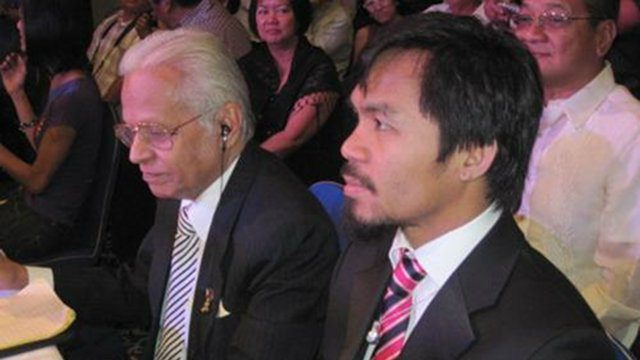 Nonito Donaire Jr, the 4-division boxing champion who fought on the Pacquiao vs Vargas undercard, was set to visit Nathanielsz at the hospital as his prognosis dimmed.

“He was a guy who loves boxing and I’m truly blessed to have known Ronnie Nathanielsz. He’s an incredible guy,” said Donaire.

“Just a genuine person. He’s the type of person who didn’t have anything to prove. He was this person that loved what he did, loved his sports and he didn’t have to do anything. He did things for free just for the fact that he loved being around the fighters, he loved watching it and he’s always supported it.”

Nathanielsz’s daughter says funeral arrangements are still being set as of this article’s publication. Rachael Nathanielsz says the family has made a tribute Facebook page to commemorate her father’s life. – Rappler.com