Eduard Folayang happy with decision to stay in ONE Championship

Nov 15, 2016 5:42 PM PHT
Nissi Icasiano
Facebook Twitter Copy URL
Copied
'I have no regrets of signing back with ONE Championship because they gave me the opportunity to fight for the world lightweight title,' Folayang says 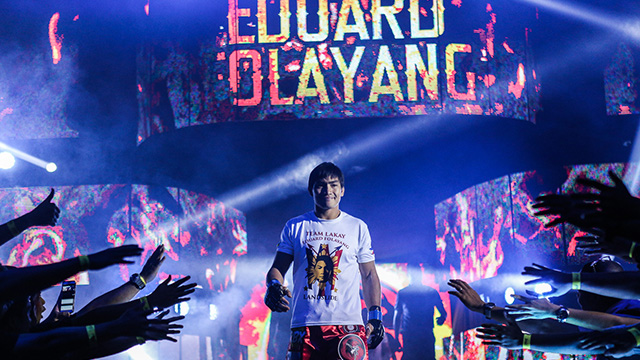 MANILA, Philippines – After capturing the ONE Championship lightweight belt at the expense of Shinya Aoki over the weekend, Eduard Folayang believes that he made a good decision to stay with the Singapore-based mixed martial arts (MMA) organization.

The 32-year-old Baguio City native almost explored the free agent market after his exclusive deal with ONE Championship expired last March, but he opted to re-sign with the same MMA promotion when it invoked its “right to match” clause.

At that time, Folayang was vocal with his desire of fighting at the Ultimate Fighting Championship’s second live event in the Philippines on October 16, which was eventually cancelled after BJ Penn pulled out his headlining bout versus Ricardo Lamas.

Even though Folayang admitted that he did receive offers from different MMA companies, he chose to put more weight on ONE Championship.

Folayang stressed that when he inked a two-year contract extension with ONE Championship, the organization did not think twice in giving him the opportunity to vie for a world title.

“I have no regrets of signing back with ONE Championship because they gave me the opportunity to fight for the world lightweight title. Also, I have to give it to them because they are doing an excellent job in promoting the sport of MMA,” he told Rappler.

After Folayang signed on the dotted line of his new contract, he immediately received a title eliminator against Australian stalwart Adrian Pang, whom he defeated by unanimous decision to secure a date with Aoki.

Folayang turned his dream of becoming an MMA world champion into a reality by beating Aoki via third-round stoppage in the main event of ONE Championship’s “Defending Honor” card on Friday, November 11.

Folayang, who has been a ONE Championship staple since the company’s inception in 2011 and has fought 10 of his last 12 outings under the promotion’s umbrella, foresees himself hanging up his gloves with the organization.

“I see it that way as long as I can still compete,” he said. – Rappler.com