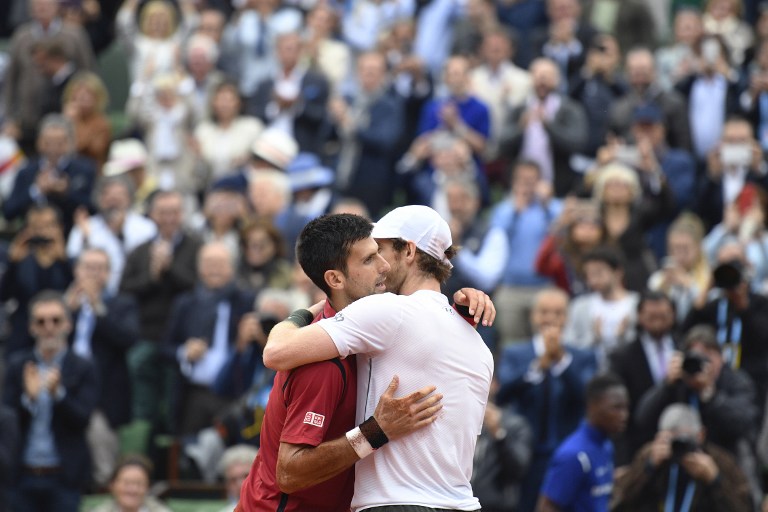 LONDON, USA – Andy Murray and Novak Djokovic will slug it out for the world number one ranking in a high-stakes final at the ATP Tour Finals after completing their contrasting paths to the dramatic showdown.

Murray and Djokovic’s unprecedented clash for pole position will end with one of the old rivals finishing the year on top of the world after the Scot shattered his rival’s 122-week reign at number one earlier this month.

Fittingly, they will bring the curtain down on the ATP season with both the prestigious Tour Finals title and the top spot up for grabs in Sunday’s final at London’s O2 Arena.

But Djokovic can say exactly the same after the defending champion thrashed Japan’s Kei Nishikori 6-1, 6-1 in the other semi.

Djokovic, who has a 24-10 lead in his head to head with Murray, said: “This is one of the biggest matches we will ever play against each other. The match everybody anticipated.

“This has never happened in the history of tennis. I’m privileged to be part of history.

“My level had been going in the right direction. Now it’s coming up to the last match of the year. I hope we get a great final.”

Crucially, Murray might be on his last legs after having to survive a 3-hour 39-minute epic against Raonic that ranked as the longest match in Tour Finals history – eclipsing the record mark set when Murray beat Nishikori in 3 hours and 20 minutes on Wednesday.

While Murray’s body has been pushed to its limits this week, Djokovic has enjoyed smooth progress to the final and, unlike his opponent, the world number two will be well rested following his 67-minute demolition of Nishikori.

Murray, bidding to win the Tour Finals for the first time in his maiden final appearance, acknowledged he is feeling the strain of his gruelling run.

“It was obviously unbelievably tough. I played some great points and managed to get the break at the end,” Murray said.

“This is one of the hardest matches I’ve played indoors. I didn’t expect to play a long one with someone with a serve like Milos.

“I’m tired. I’ve played so much tennis over the last few months. I’ll give it my best effort, the best of what I have.”

Raonic twice broke Murray when he served for the match in the final set and saved 3 match points in the decisive tie-break.

But the Canadian fourth seed couldn’t take the one match point that came his way in a thrilling denouement that eventually went Murray’s way to repeat the outcome of their meetings in the Wimbledon and Queen’s finals on the other side of London earlier this year.

Murray’s 23rd successive victory set a new career-best for the 29-year-old, who has been in sublime form since becoming a father for the first time, but only a 24th would bring a fitting finale to the best year of his life.

Djokovic has been in a prolonged slump since winning the French Open for the first time in June, sparking rumours about his private life and questions about his recent involvement with a “spiritual guru”.

But the decline is all relative and the 29-year-old, who beat Murray in the Australian and French Open finals this year, has now won 22 of his last 23 matches at the Tour Finals, keeping him on course to win the tournament for a fifth successive year and record-equalling sixth time in total.

Having played consecutive 3-set matches, Nishikori was running on fumes before the match even began and his concentration wasn’t helped when an intruder tried to run onto the court before the start of the second game of the first set.

Djokovic took full advantage by breaking Nishikori in that game and again in the fourth to establish a vice-like grip that he had no intention of relinquishing.

With the first set in the bag, Djokovic went for the kill and hounded Nishikori into dropping serve yet again in the first game of the second set.

That was the knockout blow and the 12-time Grand Slam winner sprinted to the finish line as the out-classed Nishikori folded under Djokovic’s relentless barrage. – Rappler.com