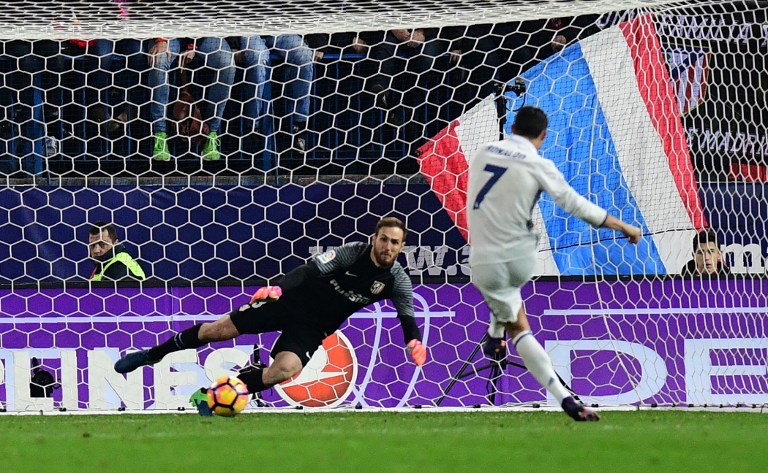 Real now lead second-placed Barcelona by 4 points after the Catalans paid a heavy price for the absence of Lionel Messi and Luis Suarez in a 0-0 draw with 9-man Malaga earlier on Saturday.

A third league defeat in four games leaves Atletico’s title ambitions in tatters in their final season at the Calderon. Diego Simeone’s men are now nine points adrift of Real down in fifth.

Ronaldo struck the decisive spot-kick as Real edged Atletico on penalties in the Champions League final in May and was the match winner once more, albeit with a slight hint of fortune.

The Portuguese’s opener took a wicked deflection on its way past the excellent Jan Oblak.

Ronaldo doubled Real’s lead from the penalty spot 19 minutes from time before a brilliant Gareth Bale cross teed him up for the simplest of finishes to complete his hat-trick.

Only an incredible save by Oblak prevented Ronaldo opening the scoring with a towering header on 12 minutes that the Slovenian somehow clawed away low to his left.

Oblak made another smart save to deny Luka Modric moments later, but he was helpless for the opener as Ronaldo’s free-kick was deflected behind him via the Atletico wall.

It took Atletico until the start of the second period to get to grips with the European champions, but came out a different side after the break.

Yannick Carrasco curled inches wide from the edge of the area before Antoine Griezmann blasted a shot across goal with no Atletico player waiting to knock to the ball into an unguarded net.

However, any hopes of an Atletico fightback were punctured when Stefan Savic upended Ronaldo inside the area and the three-time World Player of the Year dispatched the resulting spot-kick.

And with Atletico stretched at the back, a brilliant run and low cross from Bale on the counter-attack teed up Ronaldo to prod home at the far post.

At the Camp Nou, Barca were held scoreless for the first time in La Liga since Malaga’s visit in 2014 without the ill Messi and suspended Suarez.

“They are two of our most decisive players. They make the difference in the most important part of the pitch, but that can’t serve as an excuse,” said Barca’s captain for the day Sergio Busquets.

Without his usual two strike partners, the focus was on Neymar to break down the mass ranks of Malaga defence.

The Brazilian fired into the side-netting inside the first 10 minutes, but Barca’s bright start quickly fizzled out.

Indeed, Juan Carlos had the best chance of the game for Malaga just before the hour mark when he rounded Barca ‘keeper Marc-Andre ter Stegen but fired into the side-netting with the goal gaping.

Malaga had to see out of the final 21 minutes with 10 men when Real Madrid loanee Diego Llorente cynically chopped down Neymar and was shown a straight red card.

Yet, even with a man advantage, Barca badly missed the creativity of Messi and injured captain Andres Iniesta as they resorted to launching cross balls into Gerard Pique, who moved forward from central defence to act as an emergency forward.

Substitute Ivan Rakitic headed inches wide, whilst Pique also had a goal ruled out for offside after Andre Gomes had struck the bar.

Sevilla moved up to third as they produced a stunning fightback from 2-0 down to win 3-2 at Deportivo la Coruna.

However, Steven N’Zonzi, Vitolo and a 93rd minute winner from Gabriel Mercado kept Sevilla 6 points off the top. – Rappler.com