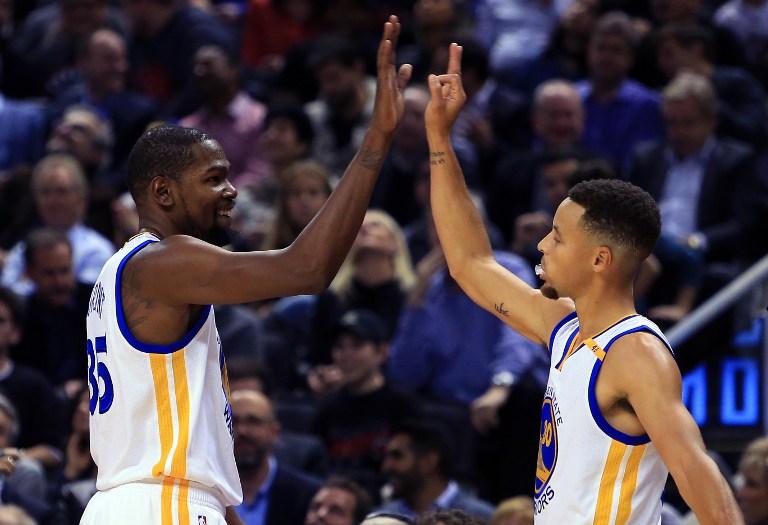 LOS ANGELES, USA – Kevin Durant scored 33 points as the Golden State Warriors held off a late rally to beat the Milwaukee Bucks as the Los Angeles Clippers extended their league-best start to the season on Saturday, November 19 (Sunday Manila time).

Durant led the scoring with teammate Klay Thompson adding 29 to give the Warriors a nerve-jangling 124-121 win on the road in Wisconsin.

A frantic finale saw the Bucks recover from a 14-point deficit in the final quarter to move within two at 122-120 before the Warriors ground out a win which sees them move to 11-2.

“Any win on the road is a good win,” Warriors coach Steve Kerr said. “Any win period is a good win, but especially on a back-to-back on a night when we didn’t quite have it.

“Our opponent played an exceptional game. I thought Milwaukee was fantastic. We were able to pull it out. We got some stops down the stretch and some rebounds. We did what we needed to do.”

Durant said the result was a good test of the Warriors character.

“We’ve played in some tight games but not down to the wire like this,” said Durant.

“It was a good test for us in the second night of a back-to-back to see how we’d respond coming to a building with a lot of energy facing a young team that was ready for us.”

Bucks coach Jason Kidd lamented his team’s inability to convert a handful of clear chances late in the game.

“That’s the game of basketball. When you play against elite teams, you just want an opportunity,” Kidd said. “We had our opportunities tonight. They just didn’t fall for us.”

The Clippers, meanwhile, ensured they have the best record in the NBA, improving to 12-2 at the Staples Center after overturning a double digit deficit against the Chicago Bulls.

A lethargic start from the Clippers saw the Bulls race into a 19-point lead at one stage of the second quarter, with Dwyane Wade, who led the scoring with 28 points, superb.

However, the Clippers came back with 26 points from Blake Griffin and 16 from Marreese Speights to eke out a 102-95 win.

Elsewhere Saturday, Anthony Davis scored 38 points and 16 rebounds to power the New Orleans Pelicans to a 121-116 overtime win over Charlotte.

It was the first time this season that New Orleans, who had beaten Portland on Friday, have claimed back-to-back victories.

The Pelicans clearly benefited from the return of Jrue Holiday, who returned to playing on Friday after missing the opening weeks of the season to care for his wife Lauren, who recently gave birth and underwent surgery to remove a brain tumor.

“Huge difference, offensively and defensively,” Davis said of Holiday. “He brings a presence to the team, energy and effort. When he is on the floor, we play very well.”

Langston Galloway also contributed 23 points, including five during a run in the fourth quarter when the Pelicans clawed back an 11-point deficit.

“We are starting to close games out,” Holiday said. “When we get up down the stretch and we have the lead we keep that advantage. We’re executing down the stretch better.” The Pelicans win saw them improve to 4-10.

In Houston, James Harden scored 31 points and grabbed 10 rebounds to power the Rockets over the visiting Utah Jazz 111-102.

Houston reserves produced 44 points, 19 rebounds and seven assists as the Rockets improved to 8-5 while Utah fell to 7-7 with a third consecutive loss. – Rappler.com