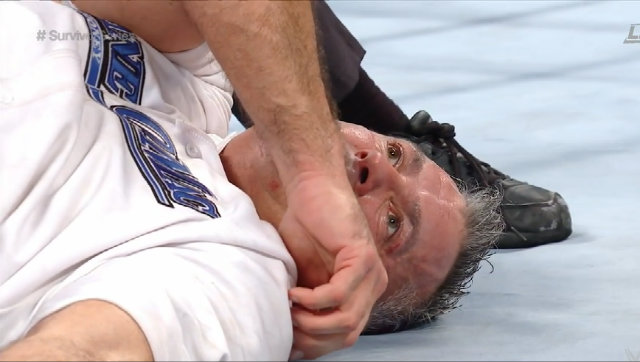 MANILA, Philippines – Shane McMahon has made a legacy of taking risks with his body, but his devil-may-care attitude may have backfired during this year’s Survivor Series.

McMahon, the 46-year-old son of World Wrestling Entertainment (WWE) CEO Vince McMahon and on-screen Commissioner of the SmackDown Live brand, brought the high spots to the traditional 5-on-5 series, which was one of the main attractions of the event on Sunday, November 20 (Monday Manila time) at the Air Canada Centre in Toronto, Canada. (READ: So, umm, Goldberg’s WWE return lasts less than two minutes)

Everything looked routine until the landing, when the back of Shane’s head bounced off the mat with a thud.

Reigns went for the pin but McMahon’s right shoulder lifted off the mat before the 3-count – perhaps involuntarily – and neither the referee or the commentators knew what to make of the matter. The referee immediately eliminated McMahon and called for medics to assist McMahon out of the ring and to the backstage area.

Afterwards, Randy Orton, who was one of his teammates during the match, responded to a tweet from a fan who observed him comforting McMahon’s children at ringside after the incident. “I’m a father. I know what it’s like to have your kids ringside when shit goes sideways,” Orton tweeted.

I'm a father. I know what it's like to have your kids ringside when shit goes sideways… https://t.co/9rtaCp48sJ

Props to Randy for going over to Shane's son. #SurvivorSeries pic.twitter.com/7hXJ9maR9i

The match continued, with Orton and his Wyatt Family teammate Bray Wyatt being the lone surviving members for Team SmackDown after Reigns was pinned by Wyatt. – Rappler.com