Nov 23, 2016 11:55 AM PHT
Bob Guerrero
Facebook Twitter Copy URL
Copied
The Philippines' hopes of an AFF Suzuki semifinal appearance take a hit with another draw. But there is still hope 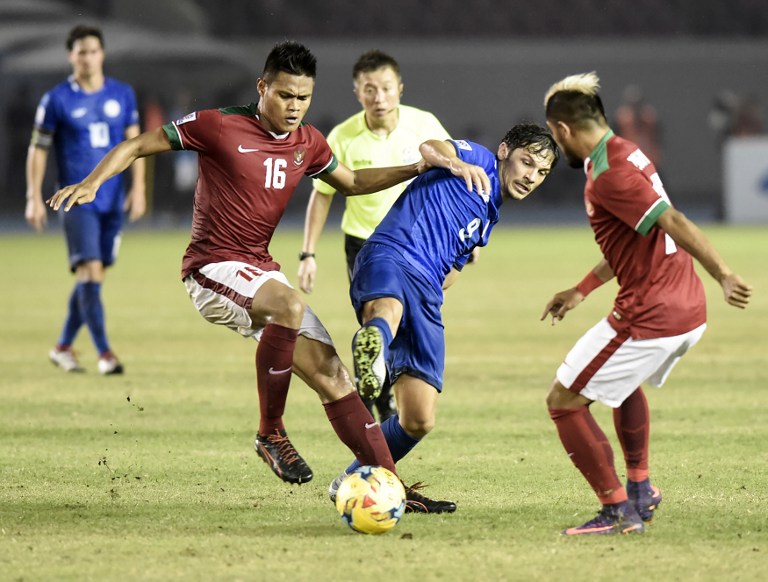 BOCAUE, Philippines – The team needed a center forward. Javi Patiño’s absence on Tuesday night was felt all game long, in my opinion.

The way I saw it, most of our crosses and corners were pretty useless. The intended targets; Mike Ott, Misagh Bahadoran, and Stephan Schrock, didn’t have the height to outjump Indonesia’s Rudolof Basna and Fachruddin Aryanto. I was almost wishing we had taken our corners short, then worked the ball in on the ground.

Patiño might have helped, but he isn’t able to make the team because of club issues. I felt that James Younghusband should have gotten his bib off. Last March we faced a similar situation against North Korea, when James was brought in for Misagh Bahadoran to deal with a tall Korean defense. He was able to get a header off and then figured in the tying goal. I think he deserved a late appearance for similar reasons.

James is a terrific header of the ball, has the length, and plenty of experience. James is primarily a winger, so we know he has pace, but he can also cause havoc in a more central attacking role. Instead Thomas Dooley tapped Mark Hartmann’s shoulder for the second match in a row. Hartmann failed to make an impact, but, to be fair to him, did not enjoy the best service.

After Saturday’s draw with Singapore I read and heard a lot of chatter about how the Philippines attacked Singapore too much in the middle instead of going wide. On Tuesday perhaps the opposite was true.

Schrock, Phil, and Roland came through when it mattered most. Schrocky supplied a peach of a free kick for Bahadoran on his goal, but it was his irrepressible work on the ball throughout the game that also shone. If I recall he was spotty against Singapore but terrific against the Merah Puti. The Bundesliga pedigree really showed.

Props too to Roland Müller, who made a series of saves in the second half that kept us in the match. Müller finished with 8 saves in total as opposed to 5 for his opposite number. Müller for me is a candidate for Man Of The Match honors.

Dooley’s decision to go with Müller, who had precious little game time in recent months, over Patrick Deyto, who had enjoyed far more club action going into the tournament, looked correct on the night.

But the evenming belonged to Phil Younghusband, who finally broke a curious two-year international goal drought with a sensational free kick equalizer late in the match.

The goal was justice served. Moments earlier Basna had petulantly smacked the ball right into Phil’s head from close range. Perhaps the Indonesian was upset that Phil did not fairplay the ball with an Indonesian on the turf moments before, (I don’t think Phil noticed the injury.) How the referee gave only a yellow card and not a red is beyond me. But Phil made the Indonesians pay by stroking the leather bast Kurnia Hermansyah, the Merah Putih goalie.

The team failed to capitalize on some opportunities. Indonesia’s central midfield was awful defensively. The Pinoys bossed the middle of the park and strolled unperturbed into the attacking third. But their finishing in open play was often wanting, and at times support into the box was deficient. The Philippines failed to exploit an Indonesian defense that was sometimes disorganized, and allowed eleven goal attempts total.

The Pinoy defense was not that much tighter, permitting the visitors 14 shots at goal. But Jeff Christiaens was decent in central defense and saved a goal with a goal line clearance in the second half. He will need to continue this form on Friday.

The Indonesian visiting support was inspiring. Riding home with me from the game was Rappler Indonesia’s Karina Tehusijarana, who was in town for an unrelated event but came out to support her team. She sat with the visiting supporters in section 113.

The Indonesian crowd was loud and boisterous. They also cheered throughout the match and appeared very organized. Some of the cheers were long and complicated but they nailed them all. In the second half they ratcheted up the volume and seemed to help swing momentum to their side. They also brought in an astonishingly long Indonesian flag that they draped over a few sections.

I assumed that the Indonesians were visiting Ultras who follow the team wherever they play. But to my amazement, Tehusijarana said they were mostly expatriate Indonesians based here, including the fellow commandeering the drums.

These fans represented a country imbued with a rich and long-standing footballing culture. That’s why they knew all the cheers and understood that real fans should be heard, not just seen.

The Ultras Filipinas were amazing, as usual, and quite numerous for a weeknight. They were moved down to the lower level to be closer to the players. But the rest of the stadium only occasionally cheered with them.

I’m hoping that as the Philippines progresses in football, we cultivate a similar fan culture, so that we can truly give our team a solid home-field advantage every time.

Onward to Friday. Thailand are through to the semifinals after disposing of a stubborn Singaporean side 1-0 in Tuesday’s first game thanks to a late goal from substitute Sarawut Masuk. They have picked up the full 6 points from two matches.

I saw that game and really enjoyed seeing Thailand possess the football. But a disciplined and compact Singaporean 4-5-1 formation really stymied the War Elephants, plus the Lions were also surprisingly adept at counterattacking. The Philippines could employ play similar tactics on Friday.

Thailand’s midfield maestro Chanathip Songkrasin was superb, and he figured in the goal. But marquee striker Teerasil Dangda was rendered almost a non-factor by a Singaporean defense that really focused on him.

One player who really stood out for me was Siroch Chattong. The 23-year old wears the number 9 shirt but isn’t always at the apex of the formation. He can often be seen drifting to the left flank. Chattong is a huge player, standing 6’1/2” tall and with an impressive build. But he has decent pace as well, and gave the defender assigned to him, Faritz Hameed, fits. Hameed was yellowed halfway through the first half.

Here is where things stand: Thailand are through on 6 points and are locked in at the top spot. The Philippines is currently second on two points after two draws. Our GD is, of course, 0 but our goals-for is at +2, 2 adrift of Indonesia.

Singapore and Indonesia are at 1 point each and play each other in Rizal Memorial at the same time as our game with the Thais.

A win against Thailand puts us into the semis no matter what happens between Singapore and the Indonesians. That’s a good thing. We control our destiny. Should we draw Thailand then we also progress as long as the Lions and the Merah Putih also tie.

I think if we lose we are out.

Since Thailand has nothing to gain from Friday, they could conceivably field their entire bench to avoid injuries going into the semis. It will also be their fourth game in 11 days, so they could use some rest. They drew Australia in a World Cup qualifier on the 15th if you recall.

But I suspect that Kiatisuk Senamuang, the Thai coach, will not play a terribly weakened side. He might give goalie Kawin Thamsatchanan a rest and maybe Dangda or Chanathip too, but to field a totally junior varsity team would be a bit disrespectful to Indonesia and Singapore in my opinion.

Ironically, the draw versus Indonesia, in a twisted way, theoretically gives us an easier game against the War Elephants. Had we won and gone to 4 points, we could overtake Thailand for the top spot in the group with a win. Thailand wouldn’t want that. They fully intend to grab pole position and avoid the Group B champ in the crossover semis. (I suspect that a dangerous Vietnam will finish tops there.) In this scenario, Thailand would surely field a full-strength team. But since we drew, that is out the window.

There are lots of permutations for what can happen on Friday, but one thing is certain: win and we are in the Suzuki Cup semis for the fourth edition in a row. Let’s try to turn up or tune in to help boost the team.

LIVE on Aksyon TV, Fox Sports, and on sports5.ph