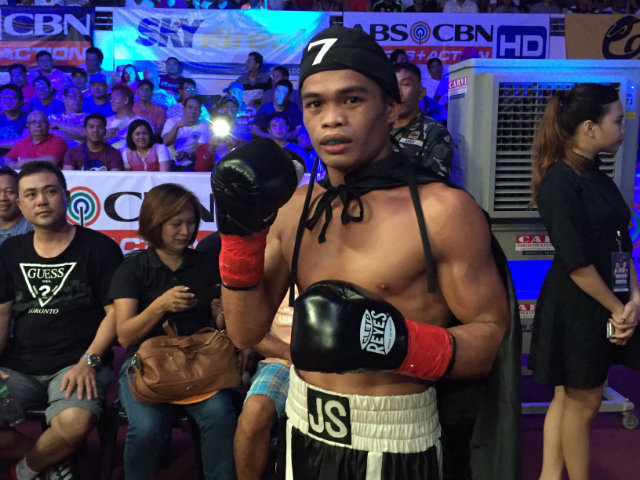 Sultan (12-3, 8 knockouts) of Tampilisan, Zamboanga del Norte, earned the International Boxing Federation (IBF) Inter-Continental super flyweight (115 pounds) title, a regional belt that often brings a top-15 world ranking, with the win over Tete (15-2-2, 11 KOs), who entered the fight as the number 14-ranked contender by the IBF.

A text message to Sultan’s promoter Michael Aldeguer of the Cebu-based ALA Promotions was not immediately answered.

“The referee stopped the fight after Tete did not punch back,” said Sultan’s trainer Robert Eturma in a Facebook message. “Jonas was so aggressive last night…[that’s] the reason why Tete was frustrated until he got [hit by a] right straight from Sultan.

“Jonas was surprised. He can’t believe that he can finish his opponent in the second round.”

“It will boost his career because long before, ALA Promotions has big plans for him,” said ALA head trainer Edito Villamor, who did not make the trip.

Sultan, 25, is known as “Zorro” because he comes to the ring with a cape and mask and is the younger brother of former Philippine welterweight champ Dondon Sultan.

The win is Sultan’s second overseas upset this year after he knocked out Japan’s Tatsuya Ikemizu earlier this year in two rounds.

Palicte set for US debut

Another Filipino 115-pounder will try to earn a win abroad this weekend as Aston Palicte (21-2, 18 KOs) will make his American debut against undefeated Oscar Cantu (14-0, 1 KOs) at the Downtown Las Vegas Event Center on Saturday (Sunday Manila time).

Palicte, 25, of Bago City, Negros Occidental, Philippines weighed in at the 115-pound limit while Cantu of Kingsville, Texas weighed 113.8. The fight will be televised by the CBS Sports Network in the United States but will be untelevised in the Philippines.

Palicte is managed by Jason Soong and will be promoted by Roy Jones Jr. Boxing Promotions for the first time. He is rated number 11 by the IBF and 15 by the WBO. – Rappler.com