The difference Nash Racela made for the FEU Tamaraws Facebook Twitter Copy URL
Copied
In 4 seasons as head coach of the FEU Tamaraws, Nash Racela has helped turn many young boys into men, and made permanent differences in their lives

MANILA, Philippines – If you take a moment to go around and ask past and present members of the Far Eastern University men’s basketball team about what impact Nash Racela has had on them, you will hear far less about improved shooting, refined on-court IQ, or a newly-unlocked talent as a lockdown defender.

In fact, you probably won’t hear anything about the game at all.

Instead, they’ll tell you about how much their outlook in life has changed because of their coach, or how they got rid of bad habits and took on great ones, or how their characters and attitudes have changed for the better in the face of adversity.

In 4 seasons as head coach of the FEU Tamaraws, Nash Racela has helped turn many young boys into men, and made huge, permanent differences to their lives.

When Racela inherited the Tamaraws in 2012, it was a team that held a different identity – or a lack of it, some might say. FEU then had a former MVP in RR Garcia, and a future one in Terrence Romeo, but, although a constant contender, had no championships since 2005.

Romeo was notorious for his score-first play, which fueled intrigue over a passive-aggressive conflict between him and Garcia and questions about whether they could cooperate on the same team.

FEU was then also tagged as a physical squad who was not beyond extraordinary on-court antics (remember the spit from 2012 and the school having to suspend its own player for it?). 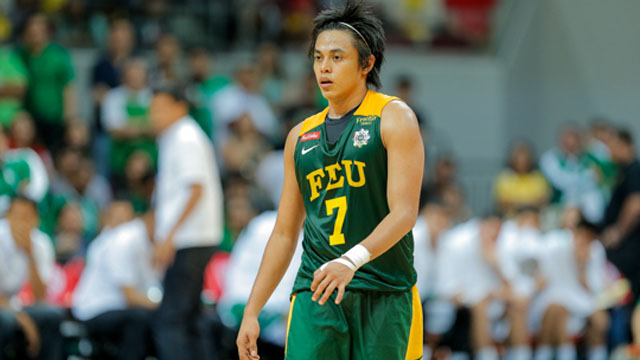 A change in team culture, top to bottom, was needed and Racela delivered.

Under his watch the team moved to dorms at the school’s Diliman campus, where the surroundings were much quieter and serene in a residential location. They moved away from the bustling, crowded, polluted Morayta and the general Manila area around it.

The idea was to minimize distractions and to strictly implement discipline. Romeo, who is now thriving in the PBA with Globalport, greatly benefitted from what Racela was trying to do.

“When coach Nash first saw me at FEU, I wasn’t as disciplined yet. He taught me to be disciplined,” Romeo told Rappler in Filipino, recalling his time at the dorms. “He gave us curfews. Once you broke it, there would be consequences.”

“Habang wala ‘yung papa ko, siya ‘yung naging tatay ko,” added Romeo, who also had his own controversial hand-wipe on Jeron Teng in Racela’s first year with FEU. (While I was away from my father, he became my father figure.)

The prolific scoring guard carried with him the wisdom of Racela not just to the PBA, but to national team Gilas Pilipinas as well, saying Racela helped shaped him into a better player today.

It took more than a year for changes to be felt in a tangible way, as in when the Tamaraws made it back to the finals in 2014.

By then, FEU was seeing the rise of the era of Mac Belo, Mike Tolomia, RR Pogoy, Russell Escoto, and Carl Bryan Cruz. Belo cemented himself as a King Tamaraw that year with his game-winning three-pointer to dethrone the DLSU Green Archers in the Final Four, and his inclusion to the Mythical Team.

FEU then lost in a historic championship victory for the National University Bulldogs, but by Racela’s urging, the team used the pain of defeat as motivation in the offseason. From Tolomia and Belo to the supporting cast of Francis Tamsi and Achie Iñigo, no Tamaraw had forgotten the feeling of watching another team celebrate a title in front of them.

With its veteran core in tact and playing with a chip on its shoulder, FEU powered through to the Season 78 crown, its first since 2005 – with Belo playing hero again in the Final Four and in the Finals, where he was fittingly rewarded with the Finals MVP honor. There was plenty of growth for FEU’s main guys. Belo, for one, known for his quiet and reserved personality on and off the court, steadily found his voice and himself with the help of his coach in his final playing year.

“‘Yung paninindigan kasi grabe ‘yung paninindigan niya talaga,” Belo, who is now among the top rookies in the PBA and has become more vocal, shared the biggest lesson he learned from Racela. (Being steadfast, because is very much like that as well.)

Pogoy, on the other hand, blossomed into an all-around threat and defensive ace for Racela on the court. He also found the leadership gene inside him, and learned to save his money.

“Grabe kasi ‘yung influence niya e. Hindi lang inside the court e, pati sa labas ng buhay namin,” reflected Pogoy, who is continuing his journey in the PBA with Racela as he is now head coach of TNT.

(His influence on us is remarkable. Not just inside the court, but outside of it in our lives. He taught us how to save up, handle other people and our families. And we had fear of God.)

(RELATED: FEU, NU boys off to become men in the PBA)

The success of the Tamaraws’ title defense came into question after their key players graduated. But even with a younger, inexperienced squad, Racela still found a way to turn them into a cohesive, more defense-oriented unit.

Veteran Monbert Arong, who transferred from Cebu and had to adjust to life in the capital in just two years, became one of Racela’s go-to guys. He is grateful to Racela and the coaching staff for helping him along the way, for their patience, and for their trust.

Arong played out his final year of eligibility in Season 79 and, despite his short stay with the team, turned emotional inside the locker room after FEU’s Final Four exit. Racela asked him to speak in front of his teammates. He broke down in tears, not because of disappointment or sadness, but because he was happy and learned so much during his time as a Tamaraw.

“Discipline and attitude, those are the most important things for coach Nash,” he shared in Filipino the values he gained and will take with him as he moves on with his life.

“He’s like my father, so he always disciplines me. That was a big help for me.”

If not helping boys at every step, Racela sometimes finds showing faith goes a long way. And so he is the trusting coach who opted for his team to elect its own captain, and the one who for years has preached shared leadership from the veterans down to the rookies. No player is above another, regardless of star power.

He is also the coach who believed in his fourth year shooting guard when few outside the team did. For Ron Dennison, who gained notoriety for his physical style of play and was eventually suspended for one game this past season, the knowledge that Racela believed in him as a person capable of clean and honest play was all he really needed.

“I learned so much from coach Nash, especially when it comes to my attitude,” he opened up, speaking in Filipino. “Everyone thinks I hit people, but I laugh it off because I really don’t do anything. But that became my background. And so I’ve been trying to prove to myself that I can play clean.”

The same was true for Raymar Jose, who started the season adjusting to the leadership that being a team captain entailed. By the end of his final season, he’d evolved into FEU’s anchor.

“I learned so much from coach, like being disciplined and about sacrifice because I see him work so hard,” Jose shared his lessons from Racela. “Just always be proud. And basketball doesn’t end here.”

History will show that Nash Racela’s legacy for the Far Eastern University Tamaraws is the fact that it was his team, his program that ended a decade-long title drought at Morayta.

The school will remember him as a coach with a knack for putting in place a robust recruitment program that will continue on beyond his tenure, more so with his brother Olsen about to take over next season.

“Coach Nash left an amazing legacy,” Romeo emphasized. “I have nothing against the coaches that came before him, they’re all good, but coach Nash gave FEU a championship after such a long time.” But the true weight of his impact will be seen – and felt – in the players he handled, and in the better persons they’ve become because of him.

(He left good things behind, and all the players became better because of him. Especially us, we’re among those players. And that’s a big deal for us.)

Racela’s ultimate goal since day one was to mentor his players and “for all of them to learn life and improve as persons.” And that is the real legacy he will leave behind.

He consistently emphasized teamwork, moving forward and letting go, and being satisfied with the quiet nobility of knowing the Tamaraws gave it their all regardless of results. He focused on everyday progress, especially in individual and team adversity quotients, even in victories.

It’s telling that Racela is proudest of his team’s character in Season 79, more than the feat itself of reaching the Final Four and pushing the twice-to-beat Ateneo Blue Eagles to a rubber match.

Racela knows his last losing game does not define his stay at the school. This FEU team, after all, is far from what it looked like half a decade ago.

“Sobrang laki ng pinagbago ng FEU, ‘yung culture na ipinundar niya sa amin,” Belo attested to the changes. (FEU has changed so much, the culture he built for us.)

But the mentorship doesn’t end after a Tamaraw graduates.

(We’re very blessed that he doesn’t just teach us on the court, but also off the court he’s there for us. Even now that we’ve graduated he’s still guiding us.)

Ask Racela about the legacy he left behind at FEU, he’d say that’s not for him to determine. He’ll let others do the talking.

Ask him whether there’s a sense of pride in the difference he’s made on young men in more ways than just the game of basketball, he’ll tell you to come back to him in a few years, when he gets calls from his former players saying they’re doing well or simply reaching out to him. He’s had some of his past players call to congratulate him on his TNT coaching gig.

“Those things you can answer later on after 5 or 10 years pag nakita mo na sila (when you see them). You cannot see the impact right away. [You’ll know] if you see them succeed despite life’s struggles,” said Racela, who will stay on as consultant at FEU.