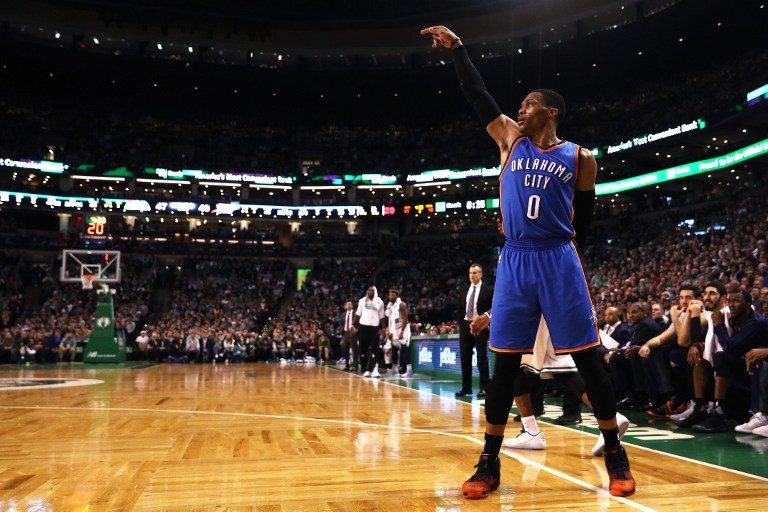 LOS ANGELES, USA – Russell Westbrook tallied 45 points, including Oklahoma City’s final 15 in the fourth quarter, to lead the Thunder to a 117-112 win over the Boston Celtics on Friday, December 23 (Saturday Manila time).

Westbrook scored 12 of his points in the final 96 seconds, including consecutive 3-pointers as he went head-to-head with Celtics star guard Isaiah Thomas.

“Isaiah was playing well, but I don’t need fuel from nobody, from any other player, to get me going,” said Westbrook, who also had 11 assists and 11 rebounds in his third straight 40-point game.

Westbrook also recorded his 14th triple-double as he is adjusting nicely to life this NBA season without Kevin Durant. Former league MVP Durant left the Thunder in the off-season to join the Golden State Warriors.

Thomas had 34 points and 10 assists in 34:17 of playing time. Afterward, he was frustrated over his team dropping to 6-6 at home but said his team “can’t hang our heads” over this loss.

As far as the guard duel, Thomas said, “I take every challenge personal. Every guard that steps in my way, it’s always personal, and I’m a competitor.”

Thomas scored 18 in the fourth and is averaging 31 points per game in the last five.

“Russell’s a tough matchup for everybody, but their length and athleticism was certainly a factor in a lot of ways,” Celtics coach Brad Stevens.

“We did a lot of good things. They did more good things and they won the game.”

Elsewhere, DeMarcus Cousins paced the attack with 32 points as the Sacramento Kings won for the fourth time in the past five games by coming from behind to beat the Minnesota Timberwolves 109-105.

Anthony Tolliver added 17 for Sacramento, which trailed by 6 with 10 minutes to play, but kept hitting from long range to overtake the Wolves.

It was the sixth time this season the Kings have shot 50 percent or better from the field.

“We’re all dialing in,” said Cousins, who had 30 or more for the third time in the last four games.

“We’re starting to realize what it takes to win games. We’re doing a great job of playing together, moving the ball, getting everybody involved. Guys are having fun right now.”

Minnesota was done in by another fourth quarter stumble.

Zach LaVine finished with a career-best 40 points, including 7 3-pointers.

“Every time we lose, it’s discouraging for us because we’ve had a chance to win almost every game,” said LaVine. “It’s annoying, but you just have to have thick skin and move onto the next one.”

Trailing by 3 in the final 30 seconds, the Wolves had two shots that would have forged a tie, but Karl-Anthony Towns missed both. He finished with 20 points 13 rebounds for his 10th consecutive double-double.

In Detroit, Durant scored 32 points and the Golden State Warriors overcame a season-high 23 turnovers to down the Detroit Pistons 119-113 at The Palace. – Rappler.com