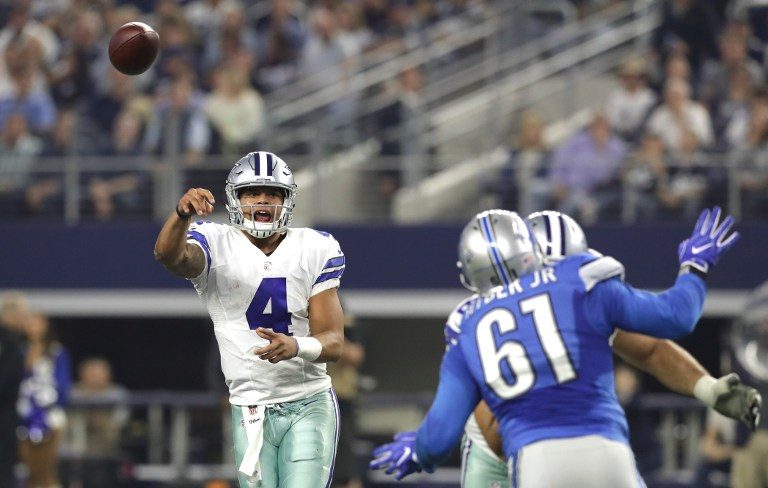 LOS ANGELES, USA – The Dallas Cowboys, already assured of home field advantage throughout the playoffs, didn’t let up Monday, December 26 (Tuesday Manila time) in a 42-21 rout of Detroit that prevented the Lions from clinching their own NFL post-season berth.

Cowboys rookie quarterback Dak Prescott passed for 212 yards and 3 touchdowns, wide receiver Dez Bryant caught two TD passes and threw one more and rookie running back Ezekiel Elliot rushed for 80 yards and two scores as Dallas improved to 13-2 with one game left in the regular season.

It’s just the third time in Cowboys history that they have won 13 games. It happened in 1992, in the run-up to a Super Bowl title. They also won 13 in 2007, but fell to the New York Giants in the playoffs.

Prescott’s 13th win of the season matched Pittsburgh’s Ben Roethlisberger for the most in NFL history by a rookie QB.

It was a sign of just how comfortable the Cowboys were feeling that Bryant threw a 10-yard touchdown pass to tight end Jason Witten as part of Dallas’s third-quarter offensive explosion.

On first-and-goal from the Detroit 10 yard line, Bryant took a pitch going to his left. Just before he reached the line of scrimmage Bryant tossed the ball to a wide-open Witten in the end zone.

Bryant became the first Cowboy since Danny White in 1985 to throw and catch a touchdown pass in the same game.

The unexpected play put an exclamation point on a dominant third quarter.

Cowboys safety J.J. Wilcox ended Detroit’s first possession of the second half with an interception of Matthew Stafford.

Dallas stopped the Lions’ second series of the third quarter at the Lions 36, and Detroit kicker Matt Prater missed a 47-yard field goal on the Lions’ third and final offensive drive of the quarter.

The Cowboys answered Prater’s miss with a 63-yard, 7-play drive capped by Prescott’s 19-yard scoring pass to Bryant that put the Cowboys up 42-21 with 12:12 remaining.

Stafford finished 26 of 46 for 260 yards and one interception. Detroit running back Zach Zenner ran for two touchdowns.

Bryant’s one-handed touchdown catch with Lions cornerback Johnson Bademosi all over him tied the game at 21-21 going into halftime.

The Lions had scored on their first 3 possessions to take a 21-14 lead with 7:40 remaining in the opening half.

The Cowboys had been first on the board thanks to Prescott’s 21-yard touchdown pass to Brice Butler and Elliot’s 55-yard touchdown run had put them up 14-7 in the second quarter.

While the 9-6 Lions missed a chance to secure a playoff berth, they can still do so next Sunday when they play the Green Bay Packers for the NFC North division crown. – Rappler.com