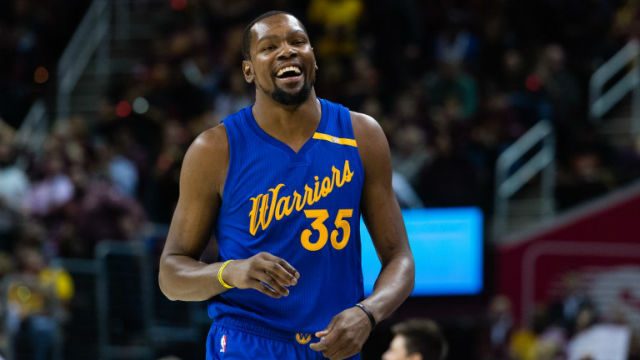 LOS ANGELES, US – The Golden State Warriors, stung on Christmas Day in their NBA Finals rematch with the Cleveland Cavaliers, took charge early Wednesday, December 28 (Thursday morning, Manila time) in a 121-111 victory over the Toronto Raptors.

Kevin Durant posted a double-double of 22 points and 17 rebounds and Stephen Curry scored 28 points for the Warriors, who had squandered a double-digit fourth-quarter lead in their 109-108 loss to the Cavs.

“It’s huge,” Curry said of the bounce-back win. “Obviously that game (on Sunday) didn’t go how we wanted it to.”

He said the 22-9 Raptors, second to the Cavaliers in the Eastern Conference, were a “good test” – and the Warriors looked determined to pass it from the start.

Golden State made 9 of their first 10 shots en route to a 22-4 lead less than 5 minutes into the contest.

Draymond Green scored 14 points and handed out 10 assists for the Warriors, who improved to 28-5.

There were miscues to be sure, notably 20 turnovers by the Warriors.

“It wasn’t pretty, but we got it done,” Curry said.

The Raptors closed to within 10 points in the third quarter and had narrowed the gap to 114-109 with 3:01 to play on a layup by DeMarre Carroll.

But Carroll and Terrence Ross were both unable to connect on 3-pointers and Curry, fouled after pulling down an offensive rebound, made both free throws with 2:04 remaining to rebuild the Warriors’ lead.

While the Raptors saw a 7-game road winning streak end, they also saw a piece of franchise history made as DeMar DeRozan became the club’s all-time leading scorer, surpassing Chris Bosh with the 15th of his game-high 29 points.

DeRozan, in his eighth NBA season, finished the night with 10,290 career points, 15 more than Bosh.

The Hawks led by as many as 6 points in the extra session but had to battle to the finish to put the game away. New York trimmed the gap to 98-97 and had a chance to win with 16.2 seconds remaining, but Knicks guard Derrick Rose, pressured by Atlanta’s Thabo Sefolosha, lost control of the ball.

The Knicks had to foul and Schroder calmly made two free throws. The Knicks inbounded to Kristaps Porzingis, who was fouled while shooting a 3-pointer but missed two of 3 foul shots with 3.6 seconds left.

Paul Millsap then made two free throws to seal the win over a Knicks team that played more than half the game without leading scorer Carmelo Anthony, who was ejected with 3:08 to play in the second quarter after a swipe to Sefolosha’s face.

New Orleans Pelicans coach Alvin Gentry was ejected after picking up two technical fouls in the first half of his team’s 102-98 victory over the Los Angeles Clippers.

The Pelicans were trailing 45-39 when Gentry was banished from the sideline for arguing a foul called on rookie guard Buddy Hield.

New Orleans were down 76-68 late in the third quarter before closing the period with a 9-0 run. The Pelicans out-scored the Clippers 21-10 in the first 7 minutes of the fourth quarter to seize control.

Anthony Davis scored 20 points and Hield added 17 as the Pelicans handed the reeling Clippers a fourth straight defeat – despite the return of point guard Chris Paul after a 3-game absence with a strained hamstring.

In Chicago, forward Jimmy Butler drained a buzzer-beater from just inside the 3-point arc to lift the Bulls to a 101-99 victory over the Brooklyn Nets.

It was also close in Denver, where Danilo Gallinari banked in a turnaround jump shot with 27 seconds left to lift the Nuggets to a 105-103 victory over the Minnesota Timberwolves. – Rappler.com