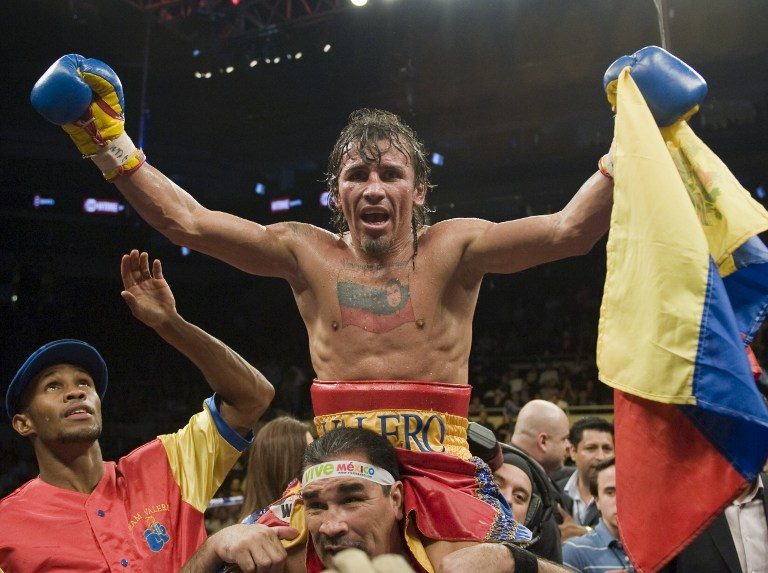 Facebook Twitter Copy URL
Copied
A movie about the life of Edwin Valero, the undefeated boxing champ accused of murdering his wife before taking his own life has created legal controversy

Two days later, he took his own life in his prison cell at 28 years old.

Now, his violent and troubling story is making headlines and causing controversy all over again, in a politically charged scandal over a banned film about his life.

The movie, “El Inca,” was a box office sensation when it premiered on November 25, rising to become the third-most lucrative film of the year in Venezuela in less than 3 weeks.

But its run came to an abrupt halt on December 13, when a judge ordered it removed from theaters and impounded all copies.

The court case was brought by Valero’s family, which accused director Ignacio Castillo Cottin of slander.

But the director alleges politics had more to do with the ruling.

“El Inca,” who won 27 fights across his career – all but one by knockout – was a fervent supporter of late president Hugo Chavez, the leftist firebrand who led Venezuela from 1999 until his death in 2013.

The country is today governed by Chavez’s hand-picked successor, Nicolas Maduro, whom opponents accuse of ruling with an increasingly authoritarian grip amid a devastating economic crisis that has sparked riots, looting and calls for his ouster.

“In Venezuela, the courts are not independent. There is evidence of a political element in the banning of this film,” said Castillo Cottin’s lawyer, Oswaldo Cali.

Castillo Cottin, the son of a famous opposition journalist, Leopoldo Castillo, denounced the ruling as censorship.

“This affects all filmmakers,” he said. “A judge should not have the authority to decide what movies we can watch.”

Valero, a southpaw, was known for his attacking style and extremely powerful punches.

He won both the WBA super featherweight and the WBC lightweight titles during his career.

Ringside photos immortalize his raw aggression as he pummeled his opponents into oblivion, the devastating punches from his muscle-corded arms sending sprays of sweat flying off one head after another.

In one famous photo, taken at his last fight in February 2010, blood runs down his tattooed chest from a cut opened over his right eye by Mexico’s Antonio DeMarco – who would go on to lose their lightweight title bout.

Beneath the streams of blood, Valero’s enormous tattoo stands out.

It is Chavez’s face, against the yellow, blue and red backdrop of the Venezuelan flag.

Chavez exalted Valero as a sporting icon of his leftist “revolution,” even inviting him to appear on his TV program, “Hello, president.”

Castillo Cottin’s movie seeks to capture the violence of Valero’s life. But it is not a hatchet job, he insists.

The film retraces Valero’s turbulent life and career, including his drug use, a bad motorcycle accident that left him with brain damage, and repeat episodes of domestic violence against his wife, Jennifer – culminating in her killing.

“It’s a great story, with impeccable details and good acting. It’s powerful, but they handled it well. I didn’t feel it was overly violent,” said Isolina Castejon, a student who was among the nearly 15,000 people who saw the film before it was pulled.

‘Judge should see it’

Valero’s family says the case is not about politics.

Cali maintains the events in the film are in the public domain, and do not require the family’s permission.

He complains that Judge Salvador Mata Garcia has not even seen the movie.

The film was banned before the defamation trial even got under way. The judge then postponed the first hearing, scheduled for last Monday, because neither he nor the prosecution had seen the movie, Cali said.

“How can he make a ruling on a movie he hasn’t seen?” said the lawyer, who works for a rights group called Public Space.

Castillo Cottin meanwhile complains the film was pulled from theaters before it had a chance to break even.

The film’s budget was around $500,000, most of which came from private investors, he said. – Rappler.com