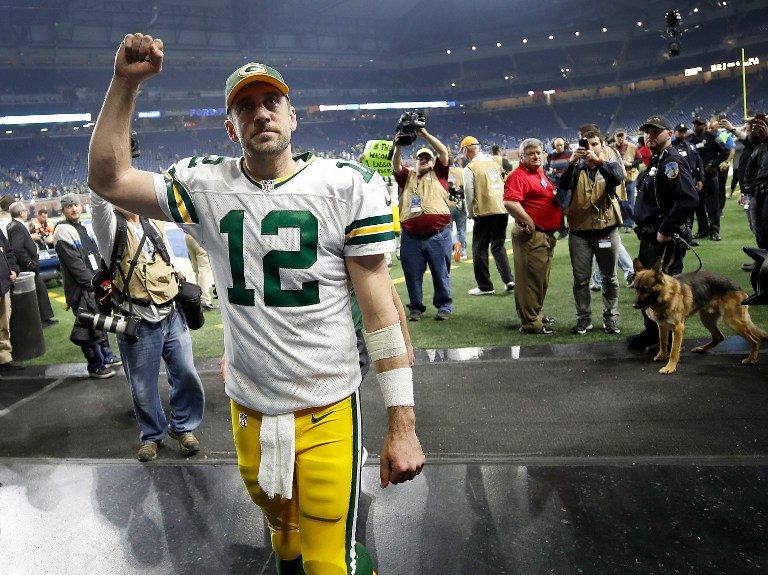 A tension-packed final day of the regular season saw the Packers and Detroit Lions capture the last playoff berths while the Atlanta Falcons and Kansas City Chiefs won to secure first-round playoff byes.

Rodgers threw for 300 yards and touchdown passes of 7 yards to Aaron Ripkowski, 3 and 9 yards to Davante Adams and 10 yards to Geronimo Allen. With 40 season touchdown passes, Rodgers is the first Packer to lead the NFL in that area since Brett Favre in 2003 as Green Bay reached the playoffs for an eighth straight year.

“We never broke,” Rodgers said. “We could have fractured at some point but we stuck together. Every game we came together with great focus. I’m really proud of these guys.”

The Lions failed to win their first division crown since 1993 but took a wildcard post-season berth thanks to Washington’s earlier 19-10 loss to the New York Giants.

Injury-hit Oakland fell 24-6 at Denver and Kansas City took the AFC West crown and the bye with a 37-27 victory in what might have been the final NFL game at San Diego.

In the National Conference, Atlanta downed New Orleans 38-32 to join Dallas with a first-round bye. Green Bay will host the Giants next Sunday and the Lions visit Seattle on Saturday in playoff openers.

In the American Conference, Kansas City joined New England with a first-round bye while Miami visits the Pittsburgh Steelers on Sunday and Oakland visits Houston on Saturday.

“Just like that your season’s over,” said Redskins coach Jay Gruden. “No question it’s frustrating.”

The Redskins lost four of their last six games to miss out of back-to-back playoff trips for the first time since 1992.

Tampa Bay’s longshot playoff bid failed despite the Buccaneers edging Carolina 17-16 after Philadelphia’s 27-13 home win over a Dallas squad that rested many of its starters. The Cowboys, who had sealed a home-field edge and bye, benched rookie rusher Ezekiel Elliott and star quarterback Dak Prescott saw only two possessions.

Atlanta scored touchdowns on its first five possessions then held off the Saints. With a loss, the Falcons would have lost the bye to Seattle, which edged San Francisco 25-23.

Oakland, which lost quarterback Derek Carr to a broken right leg last week, saw replacement Matt McGloin leave in the second quarter with a shoulder injury and rookie Connor Cook finished out the loss at Denver.

“It was pretty sweet,” Smith said. “Pretty awesome. To win the division is special as well.”

Some San Diego fans carried protest signs against Chargers ownership, which could move the club to Los Angeles this month after area voters rejected spending public money for a new stadium.

New England’s Tom Brady threw for 276 yards and three touchdowns to lead the Patriots over host Miami 35-14 to seal a home-field edge.

The Dolphins, who haven’t won a playoff game since 2000, make their first playoff appearance since 2008 at Pittsburgh, where the host Steelers downed Cleveland 27-24 in overtime on Landry Jones’ third touchdown pass, a 26-yarder to Cobi Hamilton.

The Browns finished an NFL-worst 1-15 to secure the top pick in this year’s NFL Draft.

Among non-playoff teams, the New York Jets thumped Buffalo 30-10 as the visiting Bills shockingly let New York’s Doug Middleton recover a Jets kickoff in the end zone for a touchdown.

At Minnesota, two protestors hung a banner from the roof protesting the Dakota Access Pipeline, an ongoing dispute regarding an oil pipeline taking a path through Native American tribal lands. The game continued and police later arrested the duo on trespassing charges. – Rappler.com