Nadal storms into Brisbane second round 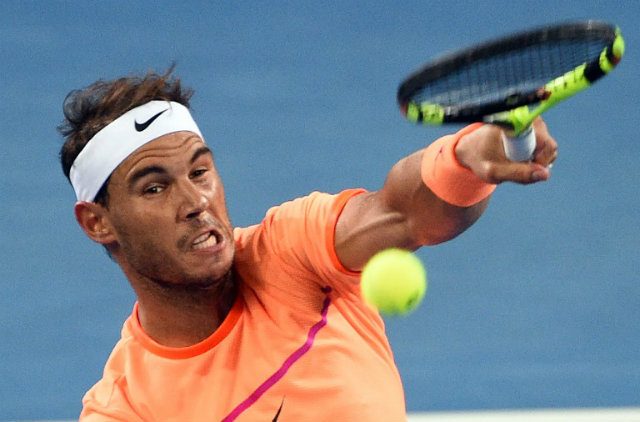 Facebook Twitter Copy URL
Copied
Nadal takes only 74 minutes to see off Dolgopolov 6-3, 6-3 and book a second round clash with Germany's Mischa Zverev

BRISBANE, Australia – Former world number one Rafael Nadal enjoyed an ideal start to his first Brisbane International Tuesday, January 3, storming into the second round with a straight sets win over Ukrainian Alexandr Dolgopolov.

Dolgopolov had beaten Nadal on their previous two encounters and he started well, breaking the Spaniard’s second service game.

But Nadal broke straight back then broke again to take the first set in 39 minutes.

He broke once more in the second set to the delight of the packed house at Pat Rafter Arena.

“It’s tough to play against him,” Nadal said of Dolgopolov.

“He’s able to – he plays a little bit Kamikaze, you know.

“He’s very aggressive with all the shots. It’s difficult to construct a point with him.”

Nadal, who played the last match of the day and finished just before midnight, only arrived in Brisbane from Abu Dhabi on Monday and said he was struggling to adapt to the time difference.

“Today, at two in the afternoon I was on the bed,” he said.

“I was destroyed. I’m not sure if it’s better to play earlier or not. I think for the moment, I think it’s better for me to play later.

“I played great in Abu Dhabi (where he won an exhibition tournament),” he added.

“I like the conditions there, and a lot of years I played well there. That’s always important for me.

“And here is an important event for me, because it’s the second event of the year and the first ATP event. It’s great to start the new year with a victory in the ATP Tour.”

Earlier, fifth seed Lucas Pouille recovered from 0-5 in the first set to see off fellow Frenchman Gilles Simon 7-6 (8/6), 7-6 (7/4) and set up a second round clash against Britain’s Kyle Edmund.

Argentine Diego Schwartzman upset Sam Querrey of the US 6-2, 6-4. – Rappler.com