Pacquiao won’t face Crawford next, will fight outside US in April – Arum 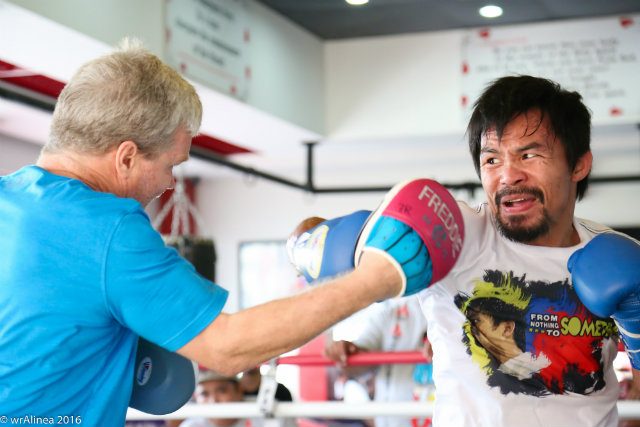 Facebook Twitter Copy URL
Copied
Bob Arum wants Manny Pacquiao's next fight to be on free TV with Australian Jeff Horn, one of the fighters being mentioned for an April 22 date

MANILA, Philippines – Bob Arum, the promoter for Manny Pacquiao and unbeaten junior welterweight champion Terence Crawford, said a clash between the two fighters “doesn’t make sense,” adding that the Filipino boxing icon’s next fight will likely not be in the United States or on pay-per-view.

“The only way we can afford a Crawford fight is on pay-per-view and I would like to avoid pay-per-view for Manny’s next fight,” Arum, the CEO of Top Rank Boxing, told RingTV.com’s Mitch Abramson.

The date Arum has in mind for Pacquiao’s next fight is April 22, which falls within the March 18 to May 1 time frame when the Philippine Senate, where Pacquiao serves as a legislator, will be in recess.

Pacquiao last fought in November 2016, dropping Jessie Vargas once and winning a unanimous decision for the WBO welterweight title for the third time.

A fight against the versatile American Crawford (30-0, 21 knockouts) would be his biggest challenge since his May 2015 fight against Floyd Mayweather Jr, which Pacquiao lost by decision in the highest grossing boxing event in history.

Pacquiao’s adviser Michael Koncz said his fighter would want a $20-million guarantee to face Crawford, whom Pacquiao’s trainer Freddie Roach described to FightHub as like “a young Mayweather” who “probably has a better punch than Mayweather.”

Among the fighters Arum has mentioned is Australian Jeff Horn (16-0, 11 knockouts), an unbeaten 2012 Olympian who is 10 years younger than Pacquiao at 28 but has built his experience mainly against aging veterans to this point.

“We have big, big offers from the Middle East, from Australia, so we’re weighing those offers now,” said Arum.

Pacquiao fought in Macau in 2013 and 2014, decisioning Brandon Rios and Chris Algieri, respectively.

Since the Mayweather fight, which sold a record 4.4 million buys, Pacquiao’s two fights – a third clash against Timothy Bradley Jr and the Vargas fight – have not sold well. Arum called sales for the Bradley rubber match “terrible” at an approximate 400,000, while he estimated that the independently-produced Vargas fight had just “a little over 300,000.”

The last time Pacquiao (59-6-2, 38 KOs) fought off pay-per-view was his 2005 fight against Hector Velazquez, a fight shown on regular HBO which came off the heels of his defeat against Erik Morales in their first fight.

“One thing I’m looking forward to – the possibility of putting the fight on free television in the United States,” said Arum.

“We’re looking at a future president of the Philippines and if he fights outside the United States and people in the United States and around the world are able to watch his fight without paying any additional money – I think it’s a plus. It puts him on a really different level.” – Rappler.com