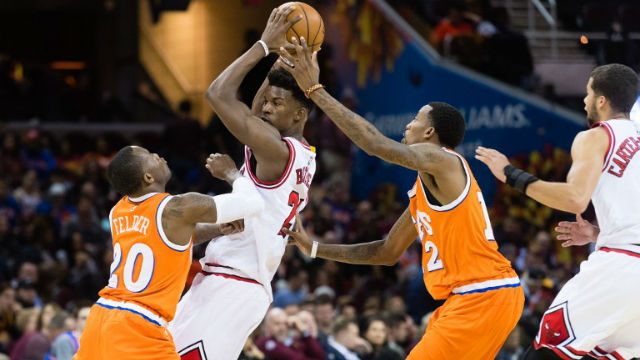 Butler, coming off a 52-point performance in a win over Charlotte on Monday, struggled to find is groove early, scoring just 3 points in the first half.

But the Bulls roared back from their slow start against a Cavs team ravaged by an array of ailments and injuries.

Cavs superstar LeBron James was fighting the flu in the matchup with his former Miami teammate Dwyane Wade.

Channing Frye also played despite feeling ill, Kyrie Irving missed a third straight game with a troublesome hamstring, and Kevin Love was absent as he continued to battle debilitating effects of food poisoning.

It looked like the Bulls might let a great chance against the weakened Eastern conference leaders go begging when they fell into a quick 15-2 hole.

But they battled back to lead by as many as 17.

Six Bulls players scored in double figures. That included Taj Gibson, who connected on 9 of 10 shots from the floor to score 18 points, Michael Carter-Williams with 13 and Wade with 10.

James finished with 31 points, 8 rebounds and 7 assists in 37 minutes. He gave the Cavs faithful a scare when he came down awkwardly on one ankle in the third quarter, but appeared to walk it off.

Two baskets from James had pulled the Cavs within 89-88 midway through the fourth quarter when Butler drew an offensive foul from the superstar as he attempted another drive.

Butler then nailed a 3-pointer at the other end to extend Chicago’s lead and the Cavs would get no closer.

After starting the night one-for-8 from 3-point range, the Bulls finished with a season-high 13 3-pointers.

They beat the Cavs for the second time this season after a 111-105 victory on December 2 – the last time the Cavaliers had dropped a decision. – Rappler.com