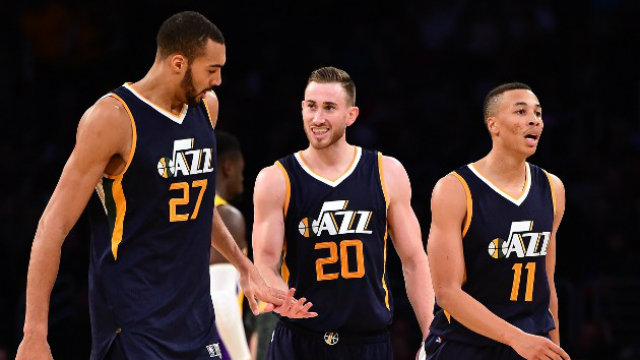 LOS ANGELES, USA – LeBron James scored a game-high 29 points but it was not enough to prevent the NBA champion Cleveland Cavaliers sliding to a 100-92 defeat at the Utah Jazz on Tuesday, January 10 (Wednesday in Manila).

James grabbed 6 rebounds and 5 assists while teammate Kyrie Irving scored 20 points on a frustrating night for the Cavs.

The Cavaliers were undone by a balanced Utah Jazz scoring display which saw no fewer than 6 players make double figures.

Gordon Hayward led the way for the home team with 28 points and 9 rebounds while Rodney Hood weighed in with a valuable 18 points.

Rudy Gobert clinched his 27th double-double of the season with 11 points and 14 rebounds to propel Utah to their third consecutive home game.

The victory helped Utah improve to 24-16, while Eastern Conference leaders Cleveland fell to 28-9 as their 3-game winning streak on the road came to a halt.

A fast-moving start saw both teams scoring at will, with 17 fast break points in the opening quarter and a further 24 points in the paint.

Cleveland opened an early 12-6 lead after back-to-back baskets from Irving but Utah quickly responded to take the lead with a pair from Hayward.

Utah gradually pulled away and three-pointers from George Hill and Rodney Hood contributed to a 10-0 run which gave Utah a 56-41 lead at halftime.

James then did his best to haul Cleveland back into the contest, draining a series of shots in the third quarter to help put the Cavs 60-58 ahead.

However Hayward then wrested back the initiative for the Jazz to inspire a 16-0 run that put Utah 74-60 ahead late in the third.

Cleveland rallied in the fourth and came within 6 when Iman Shumpert scored with an emphatic dunk that made it 96-90 with 2:26 on the clock.

But Hood’s three-pointer took Utah clear by 9 points as time ticked down and the Jazz held on. – Rappler.com