Football: So, how’s that national league coming along? 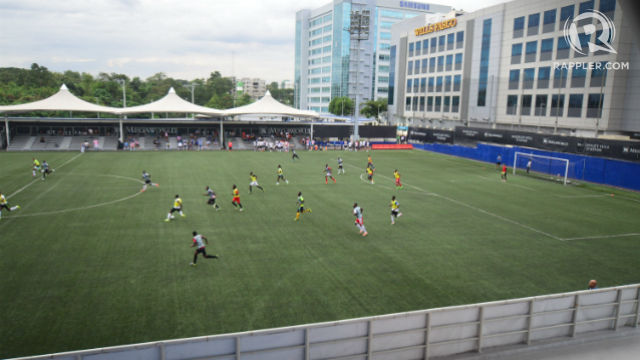 That was the text message reply of Philippine Football Federation president Nonong Araneta when asked about the percentage chance that the Philippines Football League will push through this year.

In an age of uncertainty for the sport, this is welcome news. Here is a breakdown on where we are at.

Two new entities have also thrown their hat into the ring, a group from Davao including Australian-based Filipino businessman Jeff Cheng, and a team from Ilocos. The Ilocos club’s bid is associated with another Aussie, Jarred Kelly. Last year Kelly organized a tour of the Philippines by A-League side Perth Glory. The Glory beat the Azkals in Ilocos Sur 2-0 in an exhibition at the new artificial turf stadium near Vigan, and that venue will presumably be that team’s home ground if they are allowed to join the league.

Global will play out of Cebu, most likely out of the Abellana field or the pitch of the University of San Carlos. Ceres will stay in Bacolod at Panaad Park and Stadium. Kaya, now Kaya FC-Makati, will call the University of Makati Football Field home. Loyola will represent Taguig and will play out of McKinley Hill Stadium. That facility’s claustrophobic turf pitch was supposed to be enlarged late last year but that has not happened yet. It appears Stallion will play out of Biñan Laguna, where an artificial turf field sits, while Green Archers could represent Cavite, although that is not yet a done deal.

Carmona, Cavite is set to be the home of PFF’s future headquarters and training center and could host GAU.

Another possibility for GAU could be the General Trias Sports Park, on Arnaldo Highway south of the Open Canal Road.

JP Voltes has yet to declare a community they would represent, (a requirement with this league), but they say they will furnish other requirements soon. Araneta says JPV are checking out the Marikina Sports Complex, although that field is on the small size and would need a lot of work.

As of the moment no club has firmly called dibs on Rizal Memorial as a home ground. I sort of think this is alright. That way RMS remains a neutral ground for national team matches, like Wembley in England.

“I would like to have all 9 applications approved but realistically we could have fewer clubs,” says Araneta. Having an even number of teams like eight is ideal because it would mean every team plays every weekend without anyone taking a bye.

The licensing regulations for the league are outlined here at this link.

Araneta says that a new corporation to operate the league is being formed this week that will be owned by the PFF and the clubs. A marketing group is also onboard, according to Araneta.

It appears that the league will kick off in April. That will allow Azkals coach Thomas Dooley to prepare his team for the March 28 AFC Asian Cup qualifier with fewer distractions from club duties. The venue and opponent of that game will be known during the draw on January 23. Araneta also divulged that a friendly match or matches for the national team before March 28 are possible.

Last August during the briefing PFF Secretary-General Ed Gastanes said the league will have both a League phase and knockout Cup competition. Gastanes said they would run concurrently. Araneta said this has yet to be decided. He did add that the League will follow the Australian model, with a round-robin phase then a postseason leading up to a championship match or series.

If this plan pushes through then it’s my fervent hope that the Cup welcomes non-league teams, like university/collegiate sides and squads that were in the UFL previously but won’t be in this league. That includes the military teams. If the Cup featured the same clubs as the League then in my opinion there would be no difference in character between the two tournaments.

Araneta says there is some interest from networks. I am hopeful for livestreams at the very least.

A source close to the Football Alliance, the entity that ran the UFL, says they are considering creating a league or tournament that could serve as a de facto second tier to the PFL. It could potentially be catch basin for other teams that either do not get approved for the national league, or wish not to be a part of it.

The FA has met recently to discuss their future. It seems they are in a wait-and-see mode and could start their tournament later on in the year. The source is careful to stress that they do not want to compete with PFL but instead complement them.

For sure we need lower tiers to help develop players, coaches, referees, and administrators. Mature footballing countries have pyramid structures for precisely this reason.

It is also likely that the UFL youth season will happen in the summer, with or without a senior component.

Since Stallion, a team with Iloilo roots, is now apparently going to Laguna, it appears that the inaugural season of the PFL will be without a team from the spiritual heart of Philippine football. But that could soon change.

Araneta says that a 5,000-seat football-specific stadium is set to rise in the municipality of Pavia near Centro Verde, on the outskirts of Iloilo City. Businessman Toti Cariño is said to be involved in the project. The project will rise on a 3-hectare plot of land.

The PFF president, a native of nearby Barotac Nuevo, claims some Ilonggo business figures are interested in forming a team in Iloilo. Hopefully they could come up with one for 2018. But even if the Pavia facility is not ready, the existing Iloilo Sports Complex ground could also be utilized.

But whatever happens down the road, one thing is likely for the immediate future: club football in the Philippines is about to be transformed.