Both the PWR and Philippine Hybrid X (PHX) championships were on the line. Competitors sought to impress General Manager Mr. Sy for a spot in next month’s multi-person Path of Gold Match.

Most importantly, WWE’s Senior Director of Talent Development Canyon Ceman and WWE Asia Pacific general manager Chris Marsh were in attendance to witness what Pinoy wrestling has to offer.

With local wrestling fans and WWE officials watching, it was make-or-break time for all the PWR superstars.

Here’s a recap of the show in reverse order on the card and the author’s hot takes on each one, starting from the main event.

This was Sebastian’s first title defense, and much like their first outing for the championship at PWR Live: Suplex Sunday, the action went back and forth in Bagong Yugto‘s main event. Sebastian took control early on, countering JDL’s every move. But “The Senyorito” would not be denied.

Sebastian even resorted to a low blow before hitting a Bullet to the Head, but it wasn’t enough to put JDL away.

In the final moments, JDL had Sebastian in a rear naked choke when The Apocalypse suddenly emerged and attacked The Senyorito! JDL won via DQ, but Sebastian retained his title.

It seemed like Sebastian and Apocalypse had formed an alliance, but the deranged monster had other ideas.

Hot take: This was a textbook championship match that can be pulled off effectively by ring generals like Sebastian and JDL. Both men had the Revo-nation at the palm of their hands, and both can dish out punishment on each other given the history between them.

The ending was quite intriguing, too. Apocalypse enters himself into the title picture, while other PWR superstars vie for the opportunity to face either the PWR or PHX champion at the Path of Gold Match. Match of the night: The YOLO Twins def. Fighters 4 Hire

The twins, Yohann and Logan Ollores, pulled out the “our dad is a lawyer” card to have announcer Pocholo Estrada introduce them as the “best tag team in PWR.”

Of course, Miguel Rosales and Joey Bax were having none of it, and just straight-up unleashed on the young bucks (Pun intended). Just look at how Rosales took the twins to Suplex City:

But the YOLO Twins – and another tag team – had F4H’s number. Mike Madrigal and Vlad Sinnsyk took out Rosales from ringside, then the twins took care of Bax with stereo superkicks and a Two Night Stand (modified flapjack) for the win.

Hot take: From start to finish, the “veterans versus upstarts” affair was, to quote a crowd chant, “Sobrang awesome!”

The Fighters 4 Hire may not be anybody’s mercenaries anymore, but they have consistently shown their intense, no-nonsense aggression.

Meanwhile, the YOLO Twins proved that they can hang with the big boys. Many are raring for them to shut the hell up, but no one can’t deny that they can go toe-to-toe with their opponents and rile up the crowd.

The monster battled the warrior in their second-ever face-off. Strength versus agility was the name of the game, and both Apocalypse and SANDATA served up an ample amount of pain on each other.

SANDATA showed no fear, bringing the fight to Apocalypse with a ringside brawl, ankle locks and a top-rope hurricanrana. But Apocalypse had a read on SANDATA’s moves, hitting a Death Bell slam to pick up the victory.

Hot take: The clash of styles between the two was apparent. Unfortunately, it didn’t blend well. It was smooth-sailing at the start, but veered toward rough seas halfway through. Opening the second half of the show was an intergender match between Crystal and Network head James “Idol” Martinez.

Martinez expected to have his cohorts Chino Guinto and Alexander Belmonte III at ringside, but the referee was smart enough to send the two backstage this time (More on this later).

True to form, Idol toyed with Crystal, but silenced him with her Solemate finisher.

Hot take: As always, Idol has the Revo-nation in the bag with his brand of comedy. He can make any match-up an entertaining one, whether he wins or loses.

Crystal gave it her all, too, impressing the crowd with her moves. She remains undaunted in intergender matches; that in itself is Crystal’s ace. 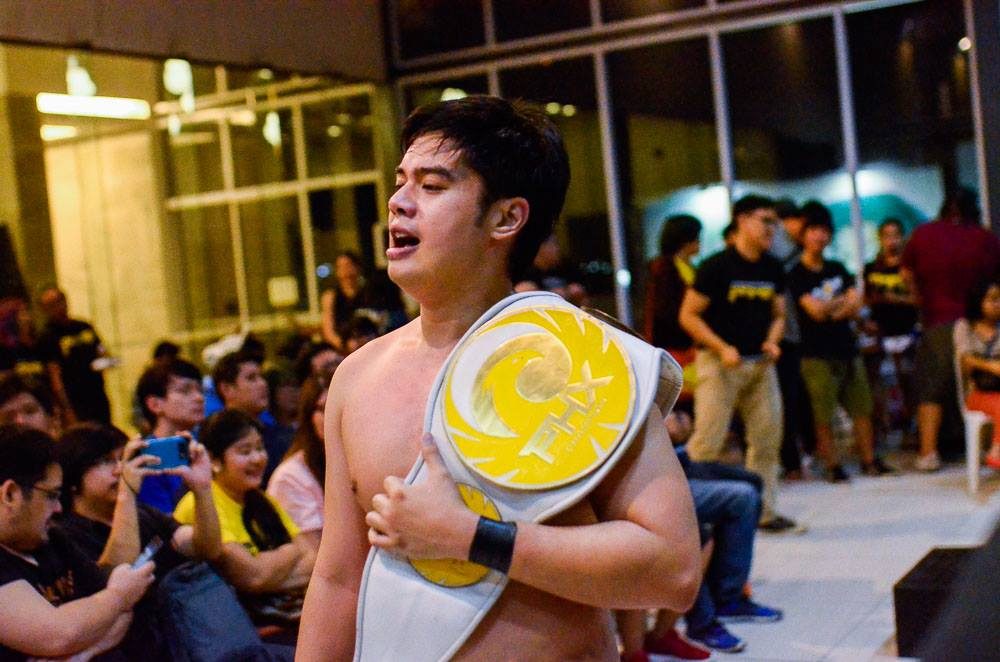 The PHX Title bout pitted the former buddies, and there was no love lost between the two, after P to the V’s betrayal at Suplex Sunday.

Main Maxx manhandled Versoza, but Peter responded with hard-hitting moves of his own. The champ didn’t buckle, however, so Versoza resorted to exposing the turnbuckle in a ring corner instead.

Hot take: It was an underwhelming title bout. Many expected it to be an athletic, hard-hitting affair, given Versoza’s betrayal and Main Maxx’s surprising agility, but they were seemingly unable to take it up a notch. The first turnbuckle spot attempt seemingly didn’t go as planned, too.

Nonetheless, congratulations to Peter Versoza. To quote him, he’s now Mr. P to the H to X.

It was lucha numero dos of the night for the Network, with the Golden Boy going up against the former PWR Champion.

Chino dictated the pace and slowed down Imabayashi. But the ex-PWR champ kept on hitting back, even dealing with the Network’s shenanigans at ringside!

The numbers game, however, was once again too much to handle. Idol got involved, and Chino brings home another bacon for the Network.

Hot take: Chino stepped up to the plate, matching Imabayashi’s amazing in-ring skills with a cunning strategy. Both also delivered in the submission department: Chino with a crossface and Ralph with a Sharpshooter!

Panzer offered a handshake, Warren conjured a “saliva shake” instead. Thus was the start of Chris Panzer and Ken Warren’s 5th face-off. Warren brought it to Panzer in his first match in 6 months, but the Panzer Army leader took it to the Social Media Sinister as well. Both have known each other so well that Warren’s Wi-Fi and Chris’ Panzerschreck finishers missed their marks.

Ultimately, a top-rope scuffle ended with Warren crashing on the canvas and Panzer landing a frogsplash to seal the deal.

Hot take: Classic one-on-one match by the two longtime rivals. However, in as much as Panzer and Warren can #FightForever and produce quality matches each time, this author would very much like to see both men climb up the ladder and claim their spots at the top of the PWR food chain. Besides, it’s about time they do so.

AB3’s debut in singles competition featured him against the lovable “King of Schlong Style” Rederick Mahaba, with The Network and Ralph Imabayashi in their respective corners.

Mahaba schooled Belmonte throughout the bout. AB3 was about to get a taste of the Jaccolade, but Idol distracted the referee and Ralph, allowing Chino to blindside Mahaba. One match down, two more to go for the Network.

Hot Take: The first of 3 matches involving The Network set the cheat-to-win narrative of the green-shirt-wearing trio all night long. Rederick was entertaining as always.

The ragtag tandem met the rebel and one fine belle in the opening contest. Sinnsyk and Madrigal didn’t give The Punkdolls breathing room and had no let-up in their offense, triggering “LGBT!” chants from the PWR crowd.

A hot tag to Robynn finally turned the tide in their favor, but a dastardly attack by Madrigal on Martivo at ringside distracted Robynn, which allowed Vlad and Mike to hit a sick double-team move for the win.

Hot take: What a good way to kick off the main show. Every character exuded confidence and played their part well in this engaging intergender match. You know good tag team wrestling when you see one. This was an excellent example.

Bombay Suarez wrestled for the first time in 8 months against the “Sagisag ng Sigasig” Dax Xaviera. The young gun showed off his skills, but the veteran Bombay showed him how it’s really done.

Hot take: Welcome back, Bombay! You still got it, flaming hand and all!

Key takeaway: Over-all, Bagong Yugto was a solid show to start the ball rolling for PWR in 2017.

The first half was pure bite-sized goodness: easy to digest and immensely satisfying. Meanwhile, most of the second half raised the bar in in-ring competition.

It was an incredible show with a very rowdy, lively crowd, as usual. All night long, everybody took the once-in-a-lifetime opportunity to show off in front of WWE officials. Who knows, maybe we’ll see a handful of PWR stars on WWE TV soon.

PWR turned the page and seized the moment. Now’s it’s time for them to get the pot of gold at the end of the rainbow.

PWR’s next show will be Path of Gold, slated for Sunday, February 26.

It will feature the annual Path of Gold Match, plus a Triple Threat All-out War Match with The Apocalypse, Jake de Leon and champion John Sebastian for PWR Championship!