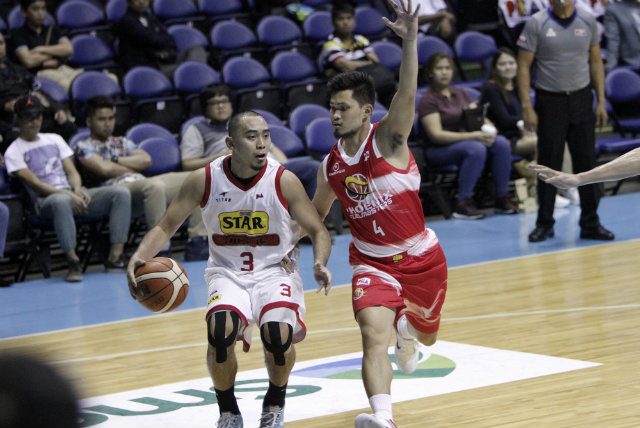 MANILA, Philippines (UPDATED) – After a year of underperforming and in just their first conference in a rebuilding bid, the Star Hotshots triumphantly made it back to the semifinals for the first time since the 2015 PBA Governors’ Cup.

The Hotshots had a handle on the Phoenix Fuel Masters from the get-go and never let up on the gas pedal to sweep the best-of-3 2017 Philippine Cup quarterfinals, 91-71, on Monday, February 6 at the Smart Araneta Coliseum.

Paul Lee, who was traded from Rain or Shine for former Hotshots star James Yap in the offseason, paced Star with 17 points to go with 9 assists and 4 rebounds.

“Again our defense stepped up in this game,” coach Chito Victolero said. “I told them it’s about our defense versus their offense.”

The Hotshots, who led by as much as 26 against the Fuel Masters, have thrived during this winning run, consistently routing their opponents by double digits – and in the last 4 games by at least 20 points.

This is the first semifinals appearance for first-year Star coach Victolero.

“I’m excited, at the same time we need to prepare because our opponent will be a veteran team,” he said in Filipino. “I think we just need to stick together, that’s been the deal.”

Phoenix, on the other hand, failed to crack the code on the surging Star even as Matthew Wright managed to get into an offensive flow with 24 points. Simon Enciso and JC Intal added 12 and 10 points, respectively, in a losing cause that saw them get clobbered in fastbreak points, 20-8.

Star will face the winner between Alaska and Barangay Ginebra on Tuesday, February 7 for a best-of-7 semis affair.