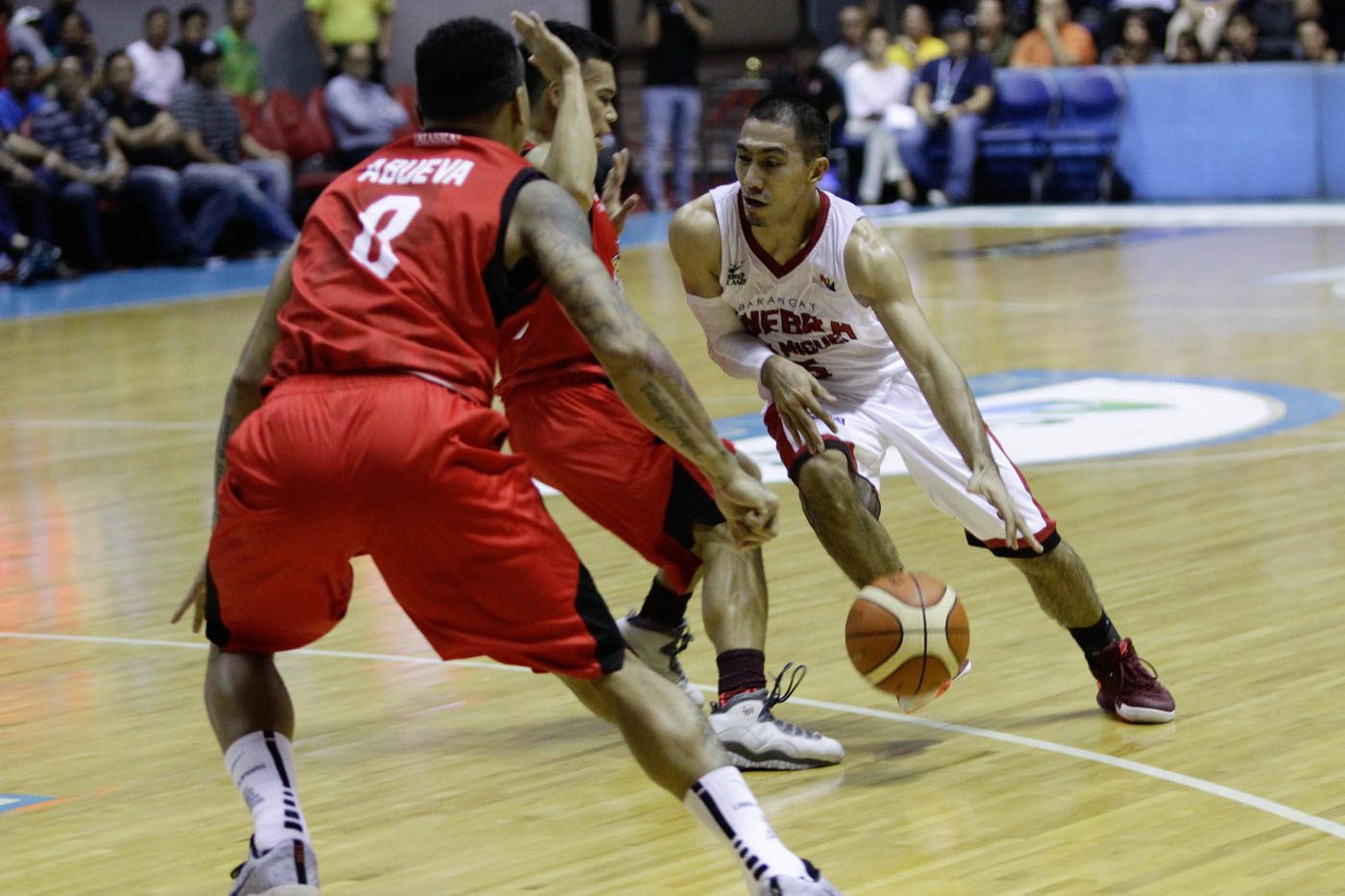 MANILA, Philippines (UPDATED) – With their championship hero Justin Brownlee watching courtside, Barangay Ginebra San Miguel stepped up big time to complete an upset of the twice-to-beat Alaska Aces, 108-97, and advance to the semifinals of the 2017 PBA Philippine Cup on Tuesday, February 7 at the Smart Araneta Coliseum.

Down another man once again, the Gin Kings saw different faces rising up to fill the void. In doing so they became only the 12th team in PBA history to overcome a twice-to-beat advantage.

“We picked the right time to play our best game of the conference,” said head coach Tim Cone.

Veteran guard LA Tenorio captained the ship with 31 points and 3 assists, including 13 markers in a defining 31-18 third quarter run.

Young guns Aljon Mariano, Kevin Ferrer, and Scottie Thompson all finished in double figures with Mariano exploding for a career-high 20 points on 8-of-11 shooting to go with 8 boards.

Ferrer came out aggressive as a starter, quickly matching Calvin Abueva’s energy and playing to his own brand of swaggering basketball similar to his UAAP days as he scattered 15 points, 5 rebounds, two steals, and a block.

Thompson, on the other hand, added 10 markers, 9 boards, and 3 dimes for the Gin Kings, who were down by two at halftime but opened the third with an 8 to nothing run to seize the lead.

“It almost takes a special group to be able to do this kind of thing,” Cone said. “And these guys proved that they were pretty special last conference, grinding out that championship, and now coming back here and finding a way to beat a really tough Alaska team.”

Abueva had another team-high 29 points, including 8 in the fourth as he tried hard to tow Alaska over Ginebra’s 14-point lead. Abueva complemented his scoring with 13 points, two assists, two steals, and two blocks.

Vic Manuel chipped in 23 points and 5 rebounds, while JVee Casio went cold after a 16-point game one with just 10 points on Tuesday. Guard RJ Jazul was scoreless in both quarterfinals games for the Aces.

Ginebra played sans forward Joe Devance, who injured his foot in game 1 of the series. Cone said the time table for his return is two weeks, though he expects to see Devance soon.

“Knowing Joe, he’ll get back earlier than that,” he said.

In a similar trend from the first game, Ginebra bucked a lackadaisical first half, settled down in the third quarter and surged forward in the fourth for the double-digit cushion and the win.