How Antique prepared for Palarong Pambansa 2017 Facebook Twitter Copy URL
Copied
With a swimming pool that has anti-wave lane lines and a fully rubberized oval track, Palarong Pambansa 2017 officials expect many records to be broken in the swimming category

ANTIQUE, Philippines – A rubberized oval track and a swimming pool that has an anti-wave feature. These are just some of the new sports facilities available in Antique for the 60th edition of the Palarong Pambansa.

Every year, the chosen host province for Palarong Pambansa face the overwhelming pressure of successfully staging the biggest sporting event in the country with little to zero roadblocks as much as possible. In its first experience to host Palaro, how is Antique province measuring up to the country’s expectations?

According to the Department of Education Assistant Secretary Tonisito Umali, the province is doing a good job. During the press briefing on Friday, April 21, Umali shared how Antique has proved itself worthy of being this year’s Palaro host.

For one, Umali cited how the province managed to “transform an old sports complex to something that is of international standard.”

He was referring to the Binirayan sports complex where the 18 regional teams will be converging on Sunday, April 23, during the Palaro Pambansa opening day. (READ: Duterte to attend Palarong Pambansa 2017 opening)

This was made possible through the the rubberized oval track that was turned over by DMCI corporation to the provincial government of Antique, according to Antique Palarong Pambansa Organizing Committee (APPOC) head lawyer Arthur Lastimoso.

Lastimoso added that they are expected to install anti-wave lane lines on their olympics-sized swimming pool, the first of its kind in Western Visayas.

“According to our tournament manager, it might be very possible that many records will be broken in this year’s Palarong Pambansa because of that development,” Lastimoso added. 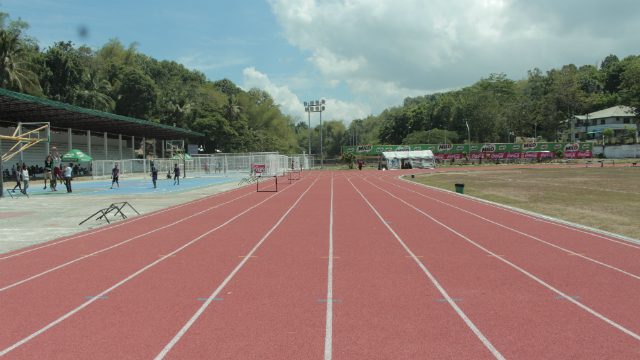 “We are talking, as a province, to our national tournament managers to come up with a sports program to maintain all the facilities that could be used by our student learners,” Lastimoso said.

Carrying the theme “Converges Youth Power, Builds Sustainable Future,” the 2017 Palarong Pambansa will highlight the role of the youth in building a better future.

More than 12,000 student-athletes from elementary and secondary schools of the country’s 18 regions will converge in San Jose de Buenavista City from April 23 to 29 to compete in 20 regular sports events and 3 demonstration sports.

President Rodrigo Duterte will attend the opening ceremony of the games on Sunday, April 23. – Rappler.com