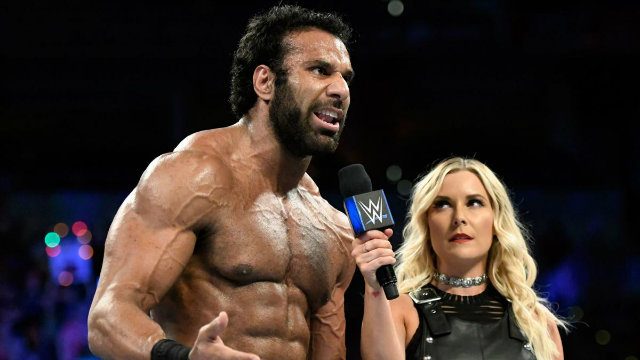 Facebook Twitter Copy URL
Copied
This is not a typo: Jinder Mahal is actually the number one contender.

Jinder Mahal is your new number one contender to the WWE Championship.

Nope, this isn’t a joke, as most of you know by now. Let’s say that again, and let’s say it loud: Jinder Mahal. Is. Your New. Number one Contender. To the WWE Championship. To Randy Orton’s WWE Championship, on the real-life version of SmackDown Live. At their next exclusive PPV Backlash. For real.

It’s a sentence even I—a staunch Jinder Mahal fan even from way back in his first WWE run, before 3MB even made him entertaining—never thought would be saying this time last week. Yes, there was a six-pack challenge for the contendership, also involving Sami Zayn, Dolph Ziggler, Luke Harper, Erick Rowan, and Mojo Rawley.

Looking back at it, though, it makes a lot of sense that Mahal would win, given the playing field: Orton’s next challenger has to be a clear heel in order to reestablish himself as the clear face after the Bray Wyatt fiasco at WrestleMania. So that takes out Zayn, Harper, and Rawley away from the equation. Ziggler is busy feuding with Shinsuke Nakamura, while Rowan wouldn’t be stealing his master Wyatt’s thunder, which only realistically leaves Mahal as the only option. And judging from the way everyone is reacting to his win, WWE’s played their controversial card well.

A lot of people are understandably complaining about this result. Because everyone understands that what happens in pro wrestling is predetermined, it’s a guy they don’t like being awarded an opportunity he doesn’t yet deserve. It’s a swerve for the sake of a swerve, just to say that the WWE is doing something fresh and different. The good thing is a lot of people, including myself obviously, appreciate the fact that the company is trying something new here, even if the returns don’t seem to be high. At least, not yet.

The irony’s really that there’s no pleasing the vocal majority of fans. They say they want something and someone new on their TV sets, that it’s always Roman Reigns or John Cena or even Randy Orton dominating the top of the card, but cry foul when the company does do something different. Yeah, it’s not the guy they want, it’s not the guy who needs it, but this is something, and if this something works, it could lead to a whole lot of different new somethings for other people.

The bigger play here is that with Mahal, the company doesn’t even need to please the fans; they need them to boo him as loud as they can—because unlike with Reigns, they’re actually trying to build a clear-cut heel here. And if they must piss the fans off, then so be it. Remember when the crowd actually booed a bad guy? They don’t do that anymore if they find that a wrestler can play a great heel, like Kevin Owens or Seth Rollins, so any negative reaction in this case is working out for the best.

So even though I’ve been a loyal Mahal fan since 2010 or so, the truth is I will admit that the man is not ready for this chance, both skills-wise and character-wise. While I enjoy his work, he simply isn’t prepared for that huge burden yet, for one reason or another. But at the same time, I’m well aware that all he is at the moment is a dependable opponent for Orton to reestablish himself further as he goes on his fresh championship run.

Regardless of who else deserves a main event opportunity on SmackDown, he’ll lose at Backlash for sure—and as long as both he and the creative team capitalizes on the momentum they’ve made for him, he may very well be on his way to becoming a legitimate character. He’s gotten a tweak to his evil foreigner heel gimmick, and new lackeys in the form of the Sihra brothers, better known as the Cruiserweight Classic’s Bollywood Boyz.

But what Mahal may really need here is a real character that he can get behind. A lot of superstar failures are usually on the part of the creative team and a Vince McMahon who’s out of touch. Whatever lack of charisma that comes off in Mahal’s work may be because he doesn’t seem to be able to internalize the gimmicks they’re giving him. If he’s not really an evil foreigner, then what’s the use of forcing the issue? Maybe he doesn’t have to invoke too much of his Indian culture; maybe he just has to be a heel, straight up. Maybe there’s some other angle, some other hook that he can be comfortable with. This is a hard striker who concussed one of the WWE Universe’s current favorite wrestlers. Why not start with that?

I can’t change the way you feel about Jinder Mahal, if you’re truly not impressed by him, but I will stick by this decision and see where it goes. I only hope that the WWE knows what they’re really doing, and that Mahal is working hard enough to improve not only his body (which, by the way, is an argument for another day) but his work in the ring as well. If it works out, this may be the greatest experiment they’ll have done this year. Or hell, maybe the whole brand split so far.

Do you listen to podcasts? Would you want to listen to a local podcast about pro wrestling? If the answers to those questions – especially that last one – are yes, then you should check out the cleverly-named Smark Gilas-Pilipinas Podcast, featuring Mellow 94.7 DJ and PWR General Manager Stan Sy, wrestling writer and Wrestling God Romeo Moran, and all-around multimedia person and former voice of PWR Raf Camus! This week, the boys talk to international Filipino wrestler Kai Katana, who made it as a reserve for the WWE’s Cruiserweight Classic last year and has wrestled on NXT! Listen to it here!