The player-prayer warriors of Mimaropa

Apr 29, 2017 11:46 AM PHT
Leslie Ann Sanchez
Facebook Twitter Copy URL
Copied
While the sepak takraw team of Mimaropa will go home empty-handed after months of preparation, they say the experience has taught them humility 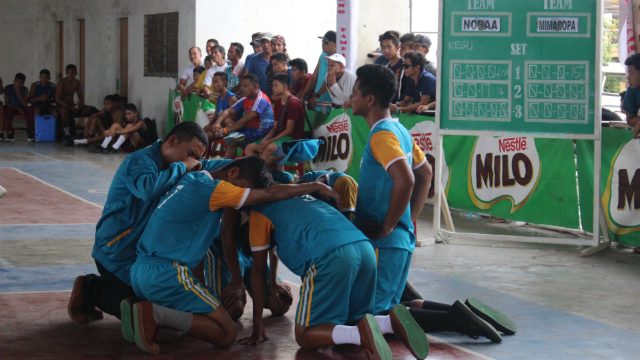 ANTIQUE, Philippines – Every year, athletes ages 8-17 vie for the top three spots in Palarong Pambansa. Bound by its virtue of honing young athletes, the Palaro seeks to mold values-oriented Filipinos.

While everybody else has eyes on the gold to equate the rigorous months-long trainings, there are some who prefer to win the hearts of their co-competitors.

Take Mimaropa’s (Region IV-B) sepak takraw boys secondary team as an example. Despite the rollercoaster ride to the cross championship game on Friday, April 28 – 2 wins against Central Luzon and Calabarzon only to land 5th after a decision game defeat by the National Capital Region (NCR) (15-21, 21-13, 23-25) – they manage to compose themselves and “offered their hearts out to God.”

The team is composed of 12 budding athletes – Jeramel Sabico, Jerome Nobles, Nino Felix Achero, Kim Mabacas and Russel Paguntalan, Allen Alexis Correa, Carl Owen Etchinique, Gerald and Emmanuel Cocjin, Ronald Ladica, Isaac Rabongga and Japhet Tejares. These kickers gained the crowd’s favor and respect because of their praying habit before, during and after their games.

(Every day I hang out beside the canteen. Every day at 6pm, they would sing Christian songs. It feels so good to hear them. I feel like I’m being serenaded.)

(I always hear Coach Rosas telling the team to “stay humble and have faith in God.” Maybe that’s why the kids are exceptional on how they treat each other, despite coming from different religions.)

While everybody else is poking their opponent’s team, throwing jokes and some “below the belt” hits, MIMAROPA remains calm. Their response? They just pray.

The ‘almost there’ moment

Having three games all packed in one day and the insufficient contact time and practice are some of the reasons why Mimaropa’s kickers nearly made it to the cross championship. Though exhausted, the scoreboard showed how the team strived and fought hard until the very end against NCR.

(For the newbies, they were only able to practice throwing for 4 days. My other players have been together for almost 5 years so it just takes them one look to know.)

Inspiration is what drew them just to make their gameplay as perfect as possible. Their takraw court in Palawan, which they said is a one kilometer walk, is not like the court here in Palaro. “Ma’am, lupa lamang po talaga yun, as in lupa lamang. Maglakad pa kami talaga.” (Ma’am, our court is really just soil. We also have to walk to get there.)

The Region’s best Regu was represented by Jeramel, Jophet, Jerome, Isaac and Emmanuel.

Julius added that the risk they took on Friday made his athletes feel that they really had given the people an exciting but heart-breaking game.

“You can’t take away the feeling of regret after losing. But our coach reminded us to accept it with an open heart,” Jophet said in Filipino.

The coach hopes for another streak in 2018 and become the country’s best sepak takraw team. “We even motivated the kids, ‘Sir Web won’t marry until you become champions.'”

After the game, the team circled in one corner beside the NCR spikers. They kneeled and uttered their prayers of thanks, with their hearts shattered and their eyes covered with tears.

“Hindi ako nagtatanim ng galit doon sa mga nakakatalo sa amin kasi dapat yung mabuti lang yung tinatanim mo, para mabuti rin ang tutubo, sa Bibliya nakalagay yun,” Jophet said. (I don’t have any anger towards those who beat us. You should only sow what is good so that you will reap what is good. That’s what the Bible says.)

At the strike of 6 pm that day, Magbanua said she heard that the team lost the game. What fascinated her is the absence of finger-pointing and “who’s to blame” scenes and the presence of positivity and humility inside the kicker’s billeting area.

“At 6pm, a guitar played and they started singing Christian songs. They were very peaceful,” she added. Siblings Julius and Webster Rosas propelled the 12 kickers from Palawan all the way to Palarong Pambansa. It was Julius, who’s also the school administrator of Faith Adventist Academy, who had the idea of putting up a playing group four years ago at Poblacion Taytay, Palawan.

“After class, I saw that they weren’t doing anything. They were living in the dorms so I thought of introducing them to sports. I called my brother and told him I needed a trainer for the boys,” he said in Filipino.

Trainer Web, as what the kickers call him admits that it was his family who gave him inspiration to do the task wholeheartedly.

“Coach is my older brother and my boss at school. They supported by career when I was a player at Puerto Princesa. When I graduated, I became a college varsity. I started teaching after. I though my playing games were over. I didn’t know it would continue,” Web said in Filipino.

The brothers encouraged the misled students to participate instead of just simply hanging around. Jophet and Russel said that being a part of the team transformed them in many ways – they both learned the value of respect for others and the importance of being a team player rather than being self-centered.

Strong-willed yet humbled, wounded but fighting. Determined and God-fearing. Julius tells his team that within the context of competition, friendship must be valued too.

They say every person’s success is seventy percent perspiration and thirty percent luck. But

Indeed, Palarong Pambansa isn’t all about winning and having the perfect moves and the head-turning skills. Most of the time, what resides in the heart is the thing that matters most. For Mimaropa’s sepak takraw players, they say they owe their achievements to God. – Rappler.com