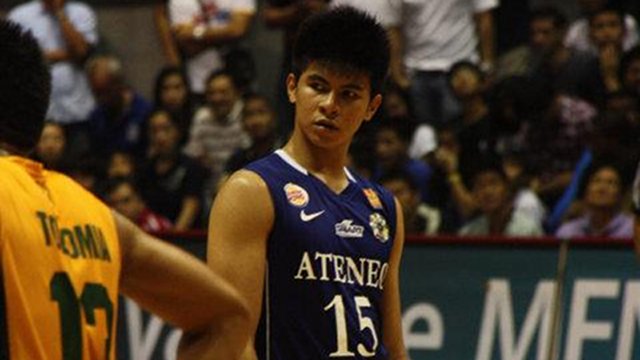 The Blue Eagles erected an early lead, building several 14-point spreads in the first half, but had to survive a lousy endgame to force a deciding Game 3 to be played next week.

Down 57-49 late in the game, the Growling Tigers roared back and dropped a 10-0 blast behind Jeric Teng, Karim Abdul and Aljon Mariano to take the driver’s seat for the first time, 59-57.

Greg Slaughter stopped the drought for Ateneo to make it 59-all before a Slaughter split and two Tonino Gonzaga freebies gave the Blue and White a 62-59 advantage.

UST’s Jeric Fortuna responded with a booming triple to tie the match anew but Slaughter and Salva made three free throws, 65-62.

After two connections from the stripe by Mariano helped the Tigers close in at 65-64, Ravena drilled in a three-pointer to make it, 68-64, with a little over two minutes remaining.

Fortuna played the hero once more, burying another trey before Kevin Ferrer sprinted for a lay-in that gave the Espana-based squad a slim 69-68 advantage with less than two minutes on the clock.

Both squads failed to convert on their ensuing offensive sets, with Slaughter bungling free-throws and Fortuna and Ravena missing their shots before the former UAAP Rookie of the Year delivered his heroics.

Ravena would finish with 21 points and four rebounds while rifling in four of six three-point attempts while Slaughter chipped in with 14 points and 10 boards. Gonzaga, who sizzled early in the game, had a tournament-best 13 points on a perfect clip from beyond the arc.

Game 3 will be on December 7, Friday, 3:30pm at the Ynares Sports Arena in Pasig City. The winner of that game will take home the PCCL title. – Rappler.com