RAW Deal: All in on the Maharajah 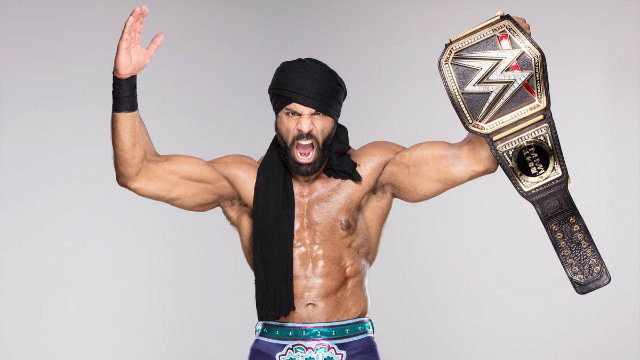 Facebook Twitter Copy URL
Copied
All of this—Mahal winning at Backlash, Mahal not losing the title on SmackDown, the Punjabi celebration—tells me the one thing I needed to know: they’re going all in on the Maharajah

You’ve had all week to deal with it, so I hope you’re ready for me saying this: Jinder Mahal is the WWE Champion.

Our WWE Champion, even, and the top champion in the WWE right now because Brock Lesnar is nowhere to be found until after RAW’s Extreme Rules.

You never thought they’d take it this far, and I’ll be honest, I didn’t either. Just last month on this very column, I predicted a sure loss for Mahal at Backlash, just because this is the type of thing the company does on a PPV like this.

And once it happened, I still didn’t pull for it, not even after the fact: once he hit the Khallas! on Randy Orton, I thought this would be a swerve for the sake of a swerve, with Orton taking back his title on the very next episode of SmackDown, just like he did with Christian back in 2011. Again, I was wrong, and we got a pretty intense Punjabi celebration to boot:

All of this—Mahal winning at Backlash, Mahal not losing the title on SmackDown, the Punjabi celebration—tells me the one thing I needed to know: they’re going all in on the Maharajah. For once, they didn’t pull a swerve for the sake of one. SmackDown continues to surprise pleasantly, and if you don’t like where they’re going, then it still works out.

Yes, the reservations are still here that Mahal isn’t quite ready yet for the position he’s in, both skills-wise and character-wise, but the truth is who’s ever ready? The exposure in the main event, with the long list of great wrestlers he can work with, can only be good for him. He was able to hold his own in the championship match, helped by the SmackDown creative team deftly booking around both of their weaknesses and earning the result, and it wouldn’t surprise me if he got even better by the time he loses the title.

But here’s one thing we have to address, though: Mahal’s jobber-to-main event rise doesn’t exactly translate into a “hard-work-is-enough,” grab-the-brass-ring mindset that consistently works in the company. His huge push is all a big political move to finally give some lucrative fanservice to the huge Indian market, and it just so happens that Mahal has put in enough work to make it believable. It shows that what a wrestler really needs to succeed in the WWE is the perfect storm of politics and work to back him. More importantly, what the WWE needs to put out something fresh and different is simply the political will on Vince McMahon’s end.

And if nothing at all, that’s where a lot of the heel heat on Mahal comes from—the notion that there are infinitely more talented wrestlers more deserving of his position. If you think the tired old anti-American act is what’s driving the boos, you’re either naïve or deluding yourself. While he did carry himself this entire time, it can’t be denied that this perception is coming from a very real place. If all you needed to do was work your ass off, then why isn’t someone like Cesaro a WWE Champion many times over by now? Or Sami Zayn?

So support Jinder Mahal if you’re really behind him, or boo him if you don’t like him. It doesn’t matter, because WWE is committed to this for all their reasons. But I also ask you to stay vigilant for all the WWE wrestlers you love, and don’t give up on them. They need all your love, and they need you to tell the company that you want to see them on top. You may not have heard it because you don’t live there, but a billion Indians, whether they were loudly cheering for Mahal or not, is nothing to joke about. That’s why they also couldn’t ignore the legions of Daniel Bryan fans in every arena back in 2014.

Meanwhile, you know where I stand. I’ll continue to tune in and keep an eye on this, just to see how all-in they really will be for this thing. Let’s hope this is the beginning of a real golden era for SmackDown. If you’re not on the wagon, you’re missing out.

On the #DIY breakup

For those who don’t watch NXT, they pulled another friendship breakup at the end of NXT Takeover: Chicago:

That was definitely entertaining, especially with the second use of their new trope where they pretend the broadcast is really over, but nope, it isn’t, there’s a turn coming! I personally don’t think it needed that and the main event spot over the NXT Championship, but it’s something different so I’m not mad at it. I just hope they don’t go for it again after a long time, because people will know it’s coming.

Was #DIY ready for this breakup? I don’t think so, given how shallow the NXT tag team division still is. But this would only mean that they have to come up with new teams to fill in the void, and I trust that they’ll do it fast. – Rappler.com

PWR Live: Resback is happening tomorrow, May 28 at the Foton Showroom on Pasong Tamo Extension, Makati! It’s a bunch of huge rematches from PWR Wrevolution X last month, the biggest show of the year, including two title matches and one big All Out War match between PWR Tag Team Championship tournament finalists the Fighters 4 Hire and the Deadly Sinns! For more details, check out the Philippine Wrestling Revolution Facebook page!

Do you listen to podcasts? Would you want to listen to a local podcast about pro wrestling? If the answers to those questions – especially that last one – are yes, then you should check out the cleverly-named Smark Gilas-Pilipinas Podcast, featuring PWR General Manager Stan Sy, wrestling writer and Wrestling God Romeo Moran, and all-around multimedia person and former voice of PWR Raf Camus! This week, the boys have newly-minted PHX Champion Chino Guinto joining them after a long time, talking about his big win at Wrevolution X and more about his beginnings! Listen to it here!