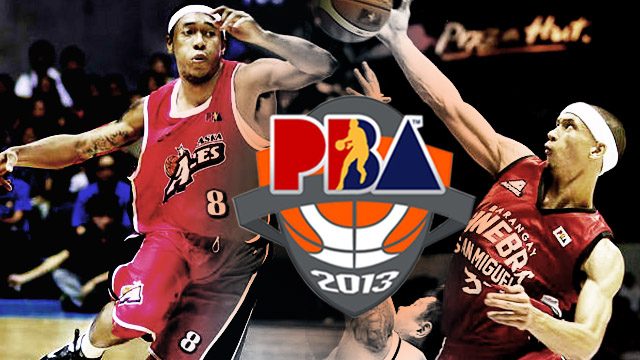 MANILA, Philippines – They’re not called “The Beast” and “Air Force” for no reason.

The Alaska Aces and the Barangay Ginebra San Miguel are on the winning track and rookies Calvin Abueva and Chris Ellis, arguably two of the most exciting players today, have played significant roles in the victories.

Abueva’s numbers (20 pts, 18 rebs vs Meralco and 21 pts, 12 rebs vs Global Port) are knocking on Most Valuable Player territory and if he keeps them up, he could be a runaway winner of the Rookie of the Year plum.

“The Beast” provides Alaska with energy and grit like no one else before and his presence has definitely been a difference maker for the franchise.

Ellis, playing behind the more celebrated stars of Ginebra, is proving he is more than just a dunker. In Ginebra’s 5-game winning streak, Ellis’ scoring has been on an upward trend (6 vs Global Port, 11 vs Talk ‘N Text, 12 vs Alaska, 15 vs RoS, and 18 vs Air21) and his rebounding, particularly on the offensive end has done wonders for his team.

“Air Force” had been showing his explosive leaping ability and he’s also no pushover on defense. He could very well be the next big thing for the crowd favorites.

Reigning Philippine Cup champion Talk ‘N Text played with poise as it turned back the Air21 Express, 100-94, to assure itself at least a playoff for the outright semifinal berth.

Best Player: Jimmy Alapag (18 pts, 4/6 3-PT FGs, 6 asts, 2 rebs)
Alapag earned a player of the week citation from the PBA after strong performances and sweet shooting from downtown that helped his team rack up wins.

Ginebra vs. Rain or Shine

Barangay Ginebra San Miguel used a 9-to-nothing run featuring LA Tenorio, Jayjay Helterbrand, and Chris Ellis, to grab hold of the driver’s seat for a 97-90 victory over Rain or Shine. Ginebra came back from an 18-point deficit and made the rally, surprisingly with reigning MVP Mark Caguioa sitting on the bench.

Rain or Shine was in control most of the way with 7 of its players scoring no less than 8 points. Jervy Cruz led the Elasto Painters with 17 points and 12 rebounds.

The Alaska Aces bounced back and ended its 4-game losing skid after edging the Meralco Bolts, 88-85, in a game that saw the return of 2012 2nd overall draft pick Calvin Abueva.

Chris Ross paced the Bolts with 14 points and 10 assists while Mac Cardona and Cliff Hodge added 14 and 13 points respectively.

Best Player: Calvin Abueva (20 pts, 18 rebs, 3 asts, 2 stls, 1 blk)
Abueva, in his first game coming back from a nasal infection, delivered beastly numbers and proved to be the difference maker for the struggling Alaska Aces.

The Talk ‘N Text Tropang Texters stayed atop the Philippine Cup standings as it dealt the Petron Blaze Boosters it’s 7th loss in the tourney, 95-82.

Arwind Santos delivered another double-double performance (22 pts, 11 rebs) but did not get much production from the rest of the team as only Alex Cabagnot (17 pts) and Marcio Lassiter (12 pts) hit double-digits in the points category.

Best Player: Jayson Castro (23 pts, 8 rebs, 5 asts)
Castro was aggressive getting to the basket and made all of his shots from downtown to lead the Texters to victory.

Meralco Bolts held off Barako Bull and played with composure down the stretch to get its 7th win in the Philippine Cup, 85-73. Rookie Kelly Nabong top scored for the Bolts with 12 points to go along with 4 rebounds and a block.

Barako Bull came back from a 19-point deficit but did not have enough in the tank to finish the rally and grab the lead. Big man Doug Kramer had another strong rebounding game hauling down 18 boards but he managed to score only 7 points.

Ginebra made basketball look easy as it took a 20-9 lead in the first quarter and never looked back as it pummeled the Air21 Express, 99-76.

Air21, which played poorly on defense, also had a horrible time finding the basket. Mike Cortez, who was traded from Ginebra, delivered one of his worst performances in an Express uniform scoring only 7 points and dishing 0 assists.

Best Player: Chris Ellis (18 pts, 4 rebs, 1 stl)
Chris “Air Force” Ellis was on fire in the first half announcing his entry to the game with a 3-pointer and capping off his barrage of points with a one-handed highlight-reel-worthy dunk.

The Alaska Aces eliminate the Global Port Batang Pier with a hard-fought 101-95 victory in Dipolog City. It was Alaska’s second straight win and rookie Abueva’s second game coming back from an injury.

Global Port fought hard and still had a chance to win the game down only by 5 points with 2 minutes left in the game but the Batang Pier still came up short despite hot shooting from Willie Miller.

Best Player: Calvin Abueva (21 pts, 12 rebs, 3 asts, 1 stl, 1 blk)
Abueva again led Alaska in scoring and rebounding and has played a significant role in his team’s troop back to the winning track.

RAPPLER’S ROOKIES OF THE WEEK

Calvin Abueva
vs Meralco (20 pts, 18 rebs, 3 asts, 2 stls, 1 blk)
vs Global Port (21 pts, 12 rebs, 3 asts, 1 stl, 1 blk)
“The Beast” has been nothing short of spectacular for the Alaska Aces delivering monstrous numbers and two straight victories coming off 4 straight setbacks for his team ever since coming back from nasal infection.

Chris Ellis
vs Rain or Shine (15 its, 7 rebs, 3 asts, 1 stl)
vs Air21 (18 pts, 4 rebs, 1 stl)
Ellis has been a picture of consistency averaging 12.4 points and 5.6 rebounds in Ginebra’s 5-stratight wins. His numbers may pale in comparison to Abueva’s, but his play on both ends of the floor has been key after Ginebra’s resurgence from a 5-game losing streak.

WHO TO WATCH OUT FOR

Mark Caguioa
Caguioa’s performance has dipped in Ginebra’s last two outings. There was a bit of an injury scare last week but San Miguel Executive Noli has said via Twitter that the reigning MVP has taken tests and is more than ready to go. While other players have stepped up, Ginebra will still need its “heart” if it wants to keep playing strong all the way to the playoffs.

JuneMar Fajardo
Petron Blaze Boosters have gone up and down in the eliminations, thankfully, they’ve earned enough wins to still, at least, fight for a quarterfinals spot. The game, usually slows down a little bit in the playoffs and that’s where the Boosters can take better advantage of the height, heft, and inside game of the top overall pick in the 2012 draft.

KG Canaleta
The Air21 will be fighting for the last quarterfinal berth against the Barako Bull and we expect Canaleta to up his game and provide ample fire power for the Express the way he did last season as he helped Ginebra clinch a semifinals berth. – Rappler.com