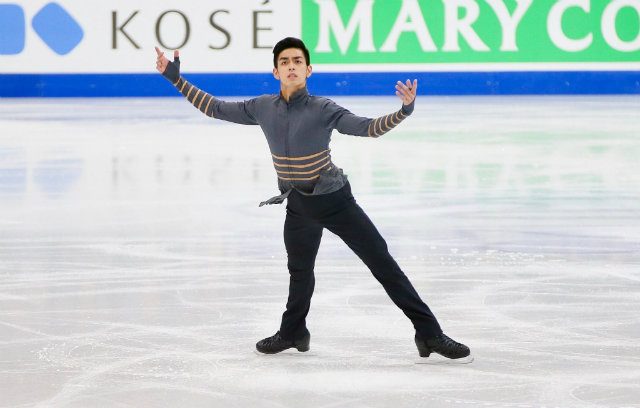 Facebook Twitter Copy URL
Copied
Martinez is working hard to make his dream of competing in the Winter Olympics again a reality. He aims to qualify via the Nebelhorn Trophy this September.

MANILA, Philippines – The Philippines’ first Olympic figure skater is in many ways far different from the one we saw at the 2014 Sochi Winter Games.

Michael Christian Martinez, for one, is no longer a baby-faced teen. Now, well he’s still quite baby-faced, but he’s also grown bigger and buffer as a 20-year-old. Another, and more important difference, is he’s matured – enough to handle the setback of having to go through the last remaining qualifier to make it back on Olympic ice.

“My mindset coming to this competition for the upcoming qualifying event for the next Olympics is that I don’t want to just make it to the top 6, I want to be the top skater there and show results of the hard work that I’ve been doing,” a sanguine Martinez told Rappler via email.

That confidence finds its roots in the hardwork he’s been putting in training in Los Angeles, and from the unbounded support of fellow Filipinos.

Martinez has one last shot at the 2018 Winter Olympics in Pyeongchang, South Korea by way of the Nebelhorn Trophy in Germany this September. He missed an opportunity when he fell short in the 2017 World Figure Skating Championships final, finishing in last place this past April.

The Muntinlupa native admitted he has evolved as a person – and consequently as a skater – over the years as a result of his experiences since capturing hearts and inspiring many at Sochi.

“I’ve been through so much in life and had to make tons of sacrifices, choices and face challenges at such a young age,” he shared pieces of the perspectives he’s gained since his historic Sochi stint. “I can really say that I’ve grown so much not just in skating but more of as a person.”

He’s taking training for the Nebelhorn Trophy very seriously, going so far as to lose weight in order to accomplish a difficult jump (even for the best of skaters) that he aims to insert into his routine: the quad jump.

“Everyone knows that the part that I’m missing are my quad jumps,” Martinez said. “I actually can do it but I wasn’t able to do so during the (World Championships) competition since [I] was not ready for it. I’m sure it will be ready for the next season.”

A quad jump refers to a figure skating jump wherein a skater has to jump and make 4 full rotations in the air before landing cleanly on the ice.

Martinez plans on inserting a couple of quad jumps into his short and long programs at the Nebelhorn Trophy in sync with “new choreography that everyone would really see the new Michael.”

These days Martinez trains with Ukranian Vyacheslav Zahorodnyuk as his technical coach, and crafts his overall routine with renowned World and Olympic choreographer Phillip Mills. His days include 3 training windows in the morning (7 am to 12:15 pm), afternoon (3 to 6 pm for beach workout), and evening (7:15 to 8:30 pm at the gym) – with Saturday being his rest day.

On his Instagram account Martinez has been updating his weight loss progress. As of this writing he said he’s lost 10 pounds. He hopes it will result in longer airtime and faster rotations, making his jumps easier and higher.

Really happy with the progress here! Sweating a lot and lost so much weight. I'm not posting just a shirtless picture, I'm recording my progress for the upcoming season. #keepgoing  – Huge thanks to @jonkepke guys please check out his page – #mcmartinez #mm

Before the all-important Nebelhorn Trophy, Martinez will test his mettle again in several US tournaments by July’s end and at the Southeast Asian Games in Malaysia this August.

An erratic final routine at the World Championships has not detered Martinez. He is not cowed by the overwhelming talent of his competitors. Nor is he intimidated by the fact that he is a winter sport athlete hailing from a tropical country, where the sun is shining year round and the only ice skating rinks are inside malls.

“I really like the Michael now—not the introverted, naive Michael that would just follow what others say, or not think if I’ll regret my choices in the future,” Martinez reflected some more on the changes that have influenced his mindset and approach to new obstacles.

“I have realized the impact I make on other people’s lives and how they can impact mine. I’ve become more focused, I am hungrier, and have better discernment towards choosing the challenges I face.”

The intention for the coming months is to build on Martinez’s short program performance at the World Championships, which he self-assessed was his best to date in his career. He has been here before. The difference lies in better wisdom and more steely resolve.

“Although I know that the competition is tough, I am confident that I will be able to make it the Olympics,” Martinez declared. “To compete in the Winter Olympics again has been my dream – my goal – and I’ve been trying to do my best to make this a reality once more.” – Rappler.com