The Durant Dynasty is coming, and it’s ugly 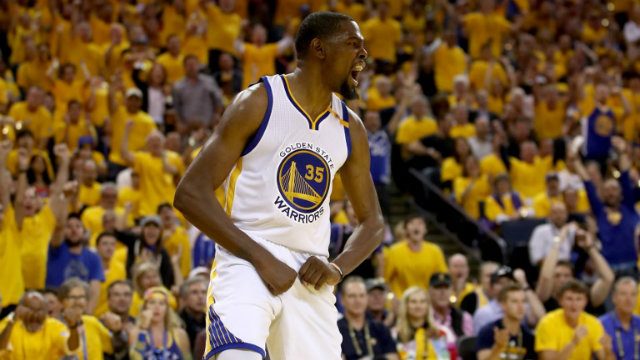 Facebook Twitter Copy URL
Copied
It appears no team can beat the Golden State Warriors, and that isn't going to change for awhile

15-0. The Golden State Warriors are waltzing to an NBA Championship via the heroics of Kevin Durant after a 118-113 victory in Game 3 over the defending champion Cleveland Cavaliers on Thursday Manila time.

Writing “defending champion” seems absurd at this point, with the way the Cavaliers have been carved up by the unrelenting firepower of the Warriors. With them a win away from possibly sweeping the entire playoffs en route to the coveted NBA Championship, the lopsided nature of this season in particular is more apparent than it has ever been.

The Warriors will win, plain and simple. Anyone saying “Cavs in 7” is just hurting themselves.

That includes you, JR Smith.

Kevin Durant’s express train to the title after a decade of futility will finally make its final stop.

In an open letter to the former MVP, Sports Illustrated’s Michael Rosenberg put it brilliantly:

“I understand the impulse that led you to Golden State. It didn’t really come from you. It came from us. We, as a sports-loving society, have become absurdly narrow-minded in our assessment of great players.”

“We act like anybody who fails to win a championship is a fraud, especially in basketball.”

Back in the old days, that wasn’t the case at all. The NBA logo himself, Jerry West, has a 1-8 record in the finals, winning only in 1972. Karl Malone and John Stockton never won a title thanks to Michael Jordan. Allen Iverson never won one either, thanks to Shaquille O’Neal and Kobe Bryant.

Yet these legends all have one thing in common: they were honored and respected almost universally. No one talks about how West is the biggest loser ever in the finals or how Stockton’s legacy as statistically the greatest point guard of all time (first all-time in assists and steals) is invalidated due to a lack of a ring.

In this age of social media and social entitlement, however, scrutiny of these athletes has been larger than ever. People felt the need to lambast LeBron James for not winning a title as if they can do a better job. Then the summer of 2010 happened, and James took his talents to South Beach.

Since then, ring-chasing has been the rampant trend as we saw once-viable players such as Anderson Varejao and David West jump from team to team just to get that final, so-called validating piece to their careers. Even McGrady tried and failed, as he joined the Spurs in 2013 only for the team to win the title the very next year when he was gone.

Now all this has led us here, with a full-blown youthful super-team hailing Kevin Durant as the poster child. The pillars of the empire have been completed and are here to stay. None of Golden State’s 4 All-Stars have hit the age of 30, which means that if all goes well and that their egos and salaries are kept in check, we are seeing a long stretch of Oakland basketball dominance.

For now, it’s fun for some people busting out the crying LeBron memes as he spirals down to a bigger losing finals record. As if the fun will last in this age of instant gratification. James will continue to age and decline as other teams scramble to create a squad strong enough to not get embarrassed in another four-game ass-whooping.

Right now, no other team in the Eastern conference can match up nicely with the Warriors. The East’s lone option is one loss away from being swept and the West’s rivaling teams have bits and pieces still missing. People will demand for change but nothing will come. NBA basketball will always end with the Warriors hoisting the title year after year.

For those who wanted this, savor the moment and we hope that you’re happy with 3 to 5 years of watching the same thing over and over. For those who don’t, pray that everything goes right for your favorite team, or any team really, and they somehow beat the Warriors like Detroit Pistons beat the 2004 Los Angeles Lakers.

“Not one, not two, not three, not four, not five, not six, not seven,” a former player of the Miami Heat once said when asked how many titles he would win. As irony would have it, he is now tasked with trying to stop Golden State from doing the exact same thing. – Rappler.com