‘Pacquiao was robbed,’ ‘lawn chairs,’ and other #PacHorn reactions 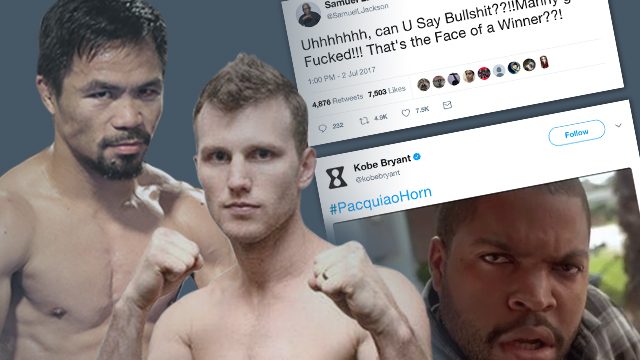 It was a literal bloodbath between the two boxers who both put their heart on the line. As always, social media is almost always all hands on deck whenever Pacman is in a fight. (READ: Live updates: Pacquiao vs Horn – Battle of Brisbane)

Some saw Pacquiao as the ‘clear winner.’

What an ending. Pacquiao the clear winner but wow.
The sort of fight they make movies about. #PacquiaoHorn pic.twitter.com/mRcwrL8Yl7

Others thought that if Pacquiao fails to knockout Horn, he would lose the match, which he did:

Some thought he needed to lose:

I hope that loss to Pacquiao knocked some sense into him

And that he needs to retire:

As usual, Pacquiao is a sport:

Even with the questionable loss pacquiao is very respectful and gracious. That's impressive right there #PacquaioHorn

But the rest of the social media, did not take the loss lightly. See some of the reactions below:

Horn headbutt Pacquiao twice, and the ref almost stopped the fight in the 9th round but still won? #PacquiaoHorn pic.twitter.com/oXij7wHZsH

Uhhhhhhh, can U Say Bullshit??!!Manny got Fucked!!! That's the Face of a Winner??!

I have to apologize… your real winner is Manny Pacquiao. #PacquiaoHorn pic.twitter.com/WinkHAB71D

The judges right before the winner was announced #PacquiaoHorn pacquiao got robbed… pic.twitter.com/cip4Mb7zO7

#PacquiaoHorn how was Horn the winner when Pacquiao was punchin his eye in the back of his head pic.twitter.com/5U8mzmV7zK

The whole world: Manny Pacquiao is the winner.

Lmao they robbed Pacquiao with that loss

Would have loved a Pacquiao loss if he really did deserve to lose.

Yankees blow the win and Pacquiao gets robbed by unanimous decision.. What a night..

In the 6th round of the match, Pacquiao received a huge cut on the head and netizens were concerned:

Lots of blood on Pacquiao's scalp, luckily for him it's not on the eye. Shouldn't be a big issue except for cosmetics #PacHorn

Meanwhile, there was some serious shade being thrown at the SunCorp Stadium in Brisbane, Australia, where the “Battle of Brisbane” was held.

Netizens can’t help but feel for the people who paid for ringside seats and got white “lawn chairs.”

Switching to the Pacquiao fight, and imagine paying thousands of dollars to sit in $5 plastic walmart chairs

Lol pacquiao still top 10 pound for pound but boxing in a ring surrounded by plastic picnic chairs. Makes no sense

Do they seriously have some cheap ass plastic lawn chairs for ringside seats? #PacquiaoHorn #TopRank

Another boxer who caught the attention of social media was Timothy Bradley, Jr, who lost twice to Pacquiao out of 3 matches, when he referred to the Japanese as “those Japans.”

Did Timothy Bradley just say "something about those Japans" ? #PacquiaoHorn

Quote of the Night from Tim Bradley: "There's something about those Japans" #pacquiaohorn pic.twitter.com/qr55YD1qP1

The JAPANS, Timothy Bradley are you serious? lololol "Something about the JAPANS" #PacquiaoHorn pic.twitter.com/1FuEaLafCh

Despite his loss today, I will always be grateful to Manny Pacquiao for lifting our spirits and uniting our nation all those years. #PacHorn