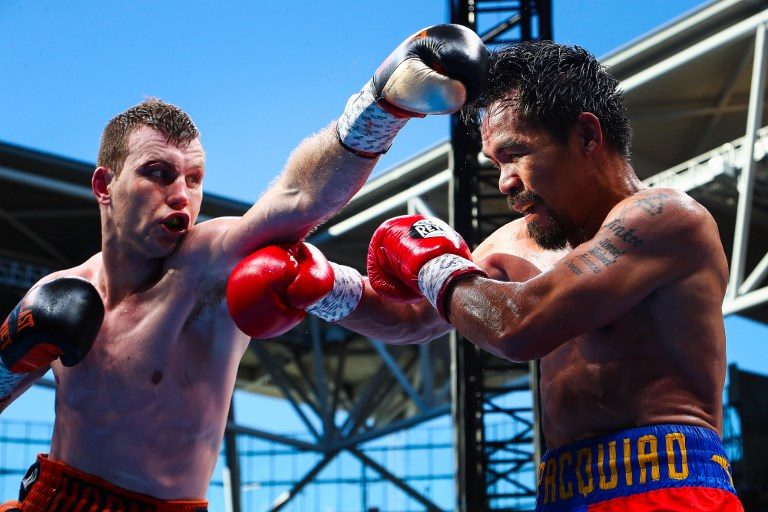 BRISBANE, Australia (UPDATED) – It was a bloodbath in Brisbane as both Manny Pacquiao and Jeff Horn had to deal with serious cuts throughout their WBO welterweight title fight.

In the end, 3 judges saw the fight for the hometown fighter Horn by the scores of 117-111 and 115-113 on two scorecards at Suncorp Stadium in Brisbane, Australia. Rappler scored the fight 117-110 for Pacquiao.

Despite many saying that they disagreed with the decision, Pacquiao said he accepted the decision of the judges, praising Horn for being “very tough, I didn’t expect him to be that tough.”

The odds may have been lopsided in Pacquiao’s favor (Horn was a +450 underdog betting underdog according to ESPN) but Horn fought above his pay grade, backing Pacquiao to the ropes in the first round and winning it on activity. Horn continued to back Pacquiao up but Pacquiao stepped it up in the third round, opening a cut on Horn’s right eye.

Horn continued to plow forward, using his head and forearms while fighting rough inside. Pacquiao’s speed and timing were negated much of the time by Horn’s physical strength.

Pacquiao sustained two separate cuts on his scalp – one on each side – which covered Pacquiao’s face in blood for much of the fight.

The ninth was Pacquiao’s best of the fight as he battered Horn around the ring, nearly forcing a stoppage. Several reporters scored the round 10-8 but none of the judges went that far.

Despite nearly stopping Horn in the ninth, Pacquiao took his foot off the gas in the final 3 rounds. Horn finished the fight with Pacquiao fighting off the ropes in the twelfth, and shadowboxed after the final bell, perhaps to show he still had more left to give.

There is a rematch clause in the contract should Horn win, and Horn said afterwards that he’d like to do it again. Pacquiao also expressed interest in fighting Horn again.

Pacquiao’s promoter Bob Arum said there are provisions for a rematch, and the contract states that it must take place in Brisbane. Tourism and Education Minister Kate Jones estimates the attendance to be between 51,000 and 52,000. (READ: Arum says Pacquiao’s senatorial duties hurting boxing career)

Punch statistics favored Pacquiao heavily, 181-93, according to ESPN. Still, Pacquiao looked his age at 38, which is 9 years older than Horn, who announced to the crowd afterwards that he and wife Joanna were expecting their first child.

The decision was met with jeers online, with New York-based promoter Lou DiBella tweeting: “That is awful. Omg. There is NO WAY. No way, #Boxing loses again. God help this ‘sport.'”

It was the second defeat for Pacquiao’s family in the day after his cousin Jonel Dapidran lost a unanimous decision to Brent Dames in the show’s opening fight. – Rappler.com