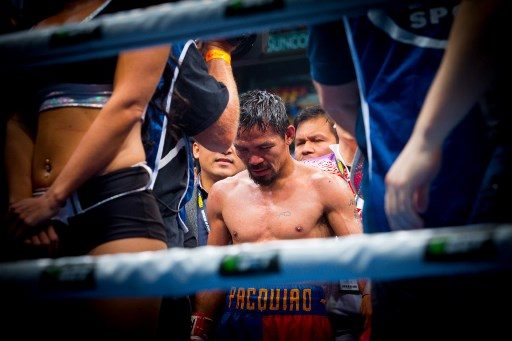 MANILA, Philippines – Manny Pacquiao has said he will “think hard” about retiring after his stunning and controversial defeat to unheralded Australian challenger Jeff Horn.

Arriving home in the Philippines a day after losing his World Boxing Organization welterweight title in a major upset in Brisbane on Sunday, July 2, the 38-year-old Pacquiao said he was thinking about hanging up his gloves for good.

“I am also considering the opinion of people, the opinion of my family and my body,” Pacquiao told ABS-CBN on Monday night, July 3, when asked about retirement.

“I plan to relax first and recover from the pains in my body and then after that, when I have already relaxed, that’s when I will think hard about it.”

Immediately after the fight, Pacquiao had said he wanted a rematch with Horn.

Pacquiao’s wife, Jinkee, and his trainer, Freddie Roach, had said they would advise him to quit boxing after a phenomenal 22-year professional career in which he won world titles in an unprecedented 8 weight divisions.

Pacquiao briefly retired from boxing last year to pursue his long-held political ambitions and was elected senator. But he quickly made a successful comeback against Jessie Vargas in November, saying he still felt like a youngster.

On Monday, Pacquiao made disparaging comments about his opponent.

“He’s not really good but he’s really strong,” Pacquiao said of Horn, as he questioned the decisions of American referee Mark Nelson.

“There is no problem with the style of Jeff Horn if he plays dirty, because there is a referee,” Pacquiao said.

“The problem here is that the referee, I don’t know if he did it deliberately or he just did not have experience, he just allowed it and did not even give any warning for how many times. It’s as if the referee wanted to help my opponent.” (READ: ‘Corruption’ to blame after Horn win, says ESPN’s Teddy Atlas) – Rappler.com