John Cena acknowledges his ‘days are numbered’ as a WWE performer 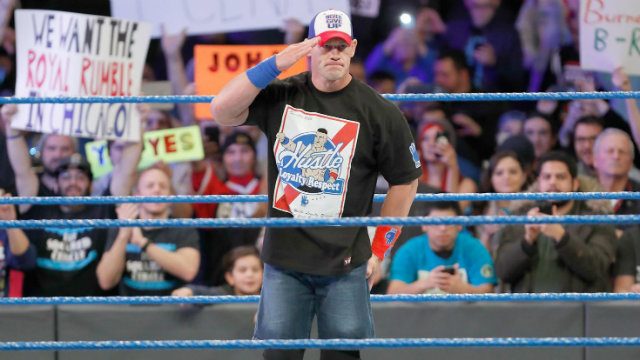 MANILA, Philippines – John Cena’s “You can’t see me” catchphrase may soon take on a new meaning.

The aging World Wrestling Entertainment star has been a part-timer for the past several years, appearing in films and on television shows as “New Era” performers like AJ Styles and Kevin Owens carry the company in the ring.

Cena told Complex the reason why he’s not been drafted to either the Raw or Smackdown brands, saying that his “days are numbered” as an in-ring performer.

“The reason that I wanted to be a free agent and the reason they kind of granted my request is because I don’t know if I’ll be available for Smackdown specific only or Raw specific only, and I also know that my days are numbered,” said Cena.

“I just turned 40 in April and we have so many young and talented performers, I don’t know how many years I have left. So in the time I have left, I’m gonna do what I can to dedicate to this company I just want to be able to do it the most time that I possibly can.”

Cena returned to television on the July 4 episode of Smackdown, but says the reason he’d not been on WWE TV prior was due to insurance concerns.

“I haven’t danced around it, I explained that the reason I cannot be on the program is because the movie folks, their insurance doesn’t allow you to. That’s a dealbreaker, it’s not negotiable,” said Cena.

Cena has held a version of the WWE’s world championship 16 times, equalling Ric Flair’s record. He has been with the company since 2001, becoming the face of the company’s pivot to family friendly “PG programming” in the late 2000s and headlining WrestleMania 5 times.

He has battled injuries in recent years, most recently having shoulder surgery in 2016 which kept him off TV until a surprise run-in at WrestleMania 32.

Cena could be the latest of the old guard to hang up his boots after Undertaker seemingly called it a career after WrestleMania 33 this year. Mark Henry, a two-time world champion, recently said on an episode of “Table for 3” that his career was also “coming to an end,” saying “I’ll go from talent to an employee here in a few months.” – Rappler.com