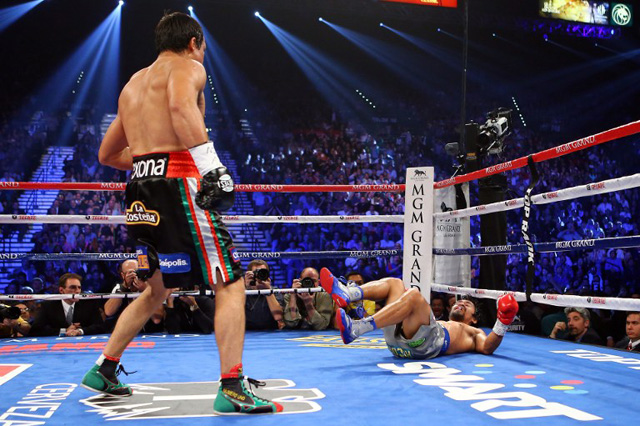 MANILA, Philippines – Philippine media commentators have put pressure on boxing great Manny Pacquiao to retire after his heavy defeat in Las Vegas, with one comparing him to Parkinson’s disease sufferer Muhammad Ali.

The southpaw who turns 34 next Monday has vowed to fight on. But many suspect that 17 years of pro ring combat are now taking their toll on the man once seen by many as the world’s finest pound-for-pound fighter.

Pacquiao, considered as a national hero, was knocked out by Mexican rival Juan Manuel Marquez in Las Vegas on Saturday in his second consecutive defeat.

“Pacquiao got hit hard but in the end, he was conquered by Father Time after it turned out he could no longer take a solid punch,” wrote sports columnist Recah Trinidad in the Philippine Daily Inquirer newspaper.

Pacquiao, who fought his way out of poverty as a teenager and is now immensely wealthy, had earlier controversially lost his World Boxing Organisation welterweight crown to unbeaten US fighter Tim Bradley on July 9.

Boxing television analyst Ronnie Nathanielsz said that while Pacquiao wants a shot at redeeming himself, there was always the danger that too many punches could condemn him to the fate of his US coach, ex-fighter Freddie Roach.

“The sight of Roach himself riddled by Parkinson’s disease and the great heavyweight champion Muhammad Ali, wracked by the disease, sends shivers among many who care deeply for Pacquiao,” Nathanielsz wrote in the Manila Standard.

Philippine Olympic Committee vice-president Joey Romasanta said Pacquiao should have quit after his last winning title defence in 2011, when he retained his WBO welterweight crown against his old foe Marquez, now 39.

“It would have been nice if he had retired while he was ahead. In boxing, there will always be somebody better. After this loss, Manny should read the signs and consider these things,” Romasanta told the Manila Bulletin newspaper.

Pacquiao, a former eight-division world champion, has parlayed his boxing fame into a film and television career. He was also elected to parliament in 2010 and even become a Bible-quoting preacher.

Critics say this has led him to lose his focus on boxing.

End on a high note

But despite their misgivings, many more Filipinos still want Pacquiao to go out on a high note by winning everyone’s dream match before retiring.

To many, that would pit him against undefeated American fighter Floyd Mayweather Jr, even though earlier efforts to set up the dream match have failed.

“He shouldn’t retire. He has to recover and redeem himself. Then he can retire,” Roel Velasco, a bronze medallist at the 1992 Barcelona Olympics, told the Bulletin.

“It would be a huge shame if one of the greatest fighters of the modern era ends his career face down on the mat,” he wrote.- Agence France-Presse