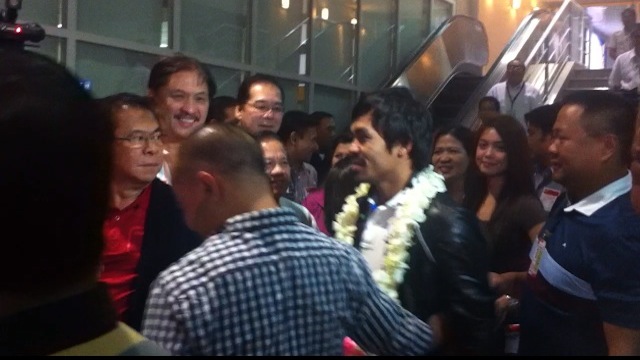 MANILA, Philippines – He said he cried after his defeat to Juan Manuel Marquez, especially since he wanted to make Filipinos happy in the wake of Typhoon “Pablo.” But despite his loss, Manny Pacquiao said he is donating P10-M to the victims of Pablo.

He could have given more had he won. “Lalo na kung nanalo,” he told reporters in a press conference at the Midas Hotel in Manila after arriving from the US. “Nakikiramay ako sa kanila.” At least 300 tuna fishermen from Pacquiao’s city, General Santos, remain missing.

Asked about his loss last Sunday, December 9, in Las Vegas, Pacquiao said: “I knew it wasn’t going to reach 12 rounds. I thought I had him. But it was Marquez’s night.”

Pacquiao arrived at the Ninoy Aquino International Airport at 6:12 am Wednesday, December 12, to a warm welcome. He vowed, “Babangon tayo uli.” (We will rise again).

He proceeded to Midas Hotel in Manila, where he was again met by fans and supporters. – Rappler.com