Aug 28, 2017 11:59 PM PHT
Jane Bracher
Facebook Twitter Copy URL
Copied
Martinez is happy with a SEA Games silver for now because the bigger picture for him is in South Korea next year 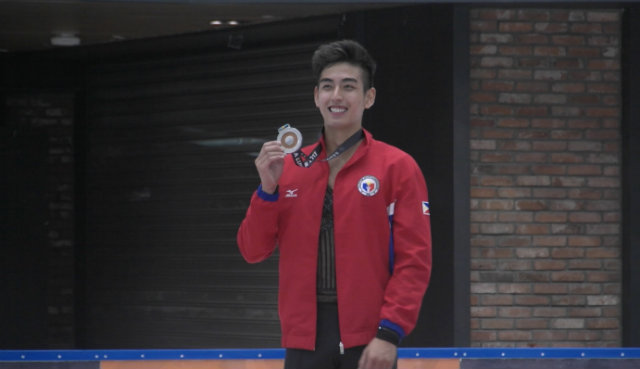 Martinez, 20, performed a new routine for his short and long programs. It might have cost him the gold since he fell in both programs. He stumbled thrice in free skate, where he earned a segment score of 116.98 for a total of 171.63 with the short program – well behind Yee’s 132.40 in the long program and 205.43 overall.

But the Filipino isn’t disappointed because he came here for the very purpose of testing out his new routine, and finally landing his first quad toe in competition. He succeeded in that respect.

“I feel like I could’ve done better but this is my first time doing my quad toe in a program. And I made it, I landed it and that’s the goal here and to be able to be ready for the next competition,” a beaming Martinez told the press.

“Right now this (SEA Games) does not matter to me because what matters to me the most is doing the quad jump, which is my preparation for Germany, which is a qualification for the next Olympics and that is the most important part for me.”

Martinez has his eyes dead set on qualifying for his second consecutive Winter Olympics after making his debut in Sochi in 2014.

After falling short in the World Figure Skating Championships, he has one more chance of qualifying through the Nebelhorn Trophy, happening in Germany from September 27 to 30. The top 6 skaters at the Nebelhorn Trophy will advance to the Winter Olympics.

Martinez has been losing weight in the last few months in an effort to make himself lighter for quad jumps. He’s now 17 to 18 pounds lighter and is also doubling his hours of training.

“Hopefully I’ll pull off two quads and land both of them,” he said.

Martinez, however, admitted that his two-day long travel time to Malaysia also took a toll on his body after his plane malfunctioned and his flight was delayed.

His Ukranian coach Yvacheslav Zagorodnyuk, a former European champion, was also happy with what Martinez accomplished given the circumstances and timing.

“For this day, it’s not bad because it’s early in the season in August and it’s two new programs,” he told Rappler. “It’s the first time he tried a quad in the program and this is very good.”

Zagorodnyuk, who’s been coaching Martinez for a year so far, also admitted they were not ready for the SEA Games since it’s still early in the season.

Martinez is happy with a SEA Games silver for now because the bigger picture for him is in South Korea next year.

“I feel like my goal is to be one of the medalists in the next Olympics.” – Rappler.com