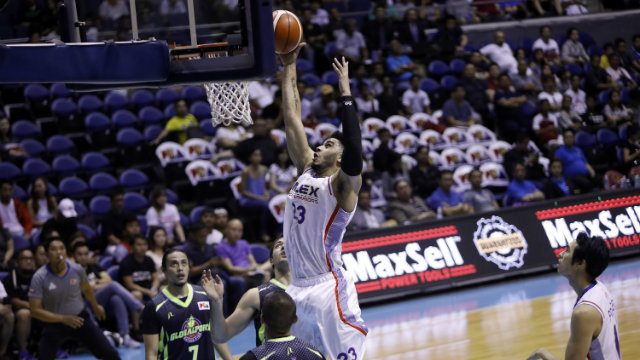 MANILA, Philippines－The NLEX Road Warriors saw their double digit cushion dwindle down, but they did just enough to contain the GlobalPort Batang Pier down the stretch to secure the 109-99 win in the 2017 PBA Governors’ Cup on Sunday, September 3 at the Smart-Araneta Coliseum.

The Road Warriors witnessed what was once an 18-point lead dry up as GlobalPort bucked a slow start and put up a show in the second half.

The two teams went neck-and-neck for the remainder of the game, with NLEX only clinging to a two-point advantage to enter the final period.

Juami Tiongson was the bright spot for NLEX in the 4th quarter as he delivered consecutive triples to hand his team an 87-80 lead to start the endgame run.

Aaron Fuller set the tone for NLEX with a double-double of 33 points and 20 boards, while Tiongson had 21 points on 5-of-7 shooting from beyond the arc.

Terrence Romeo led the charge for GlobalPort as he sank timely triples in the second quarter to bring his squad back into the game. He finished with 24 points and 4 assists off the bench.

Murphy Holloway came alive in the 4th and scored a team-high 29 points coupled with 17 boards, while Sean Anthony added 15 for the Batang Pier.

GlobalPort played the match without Stanley Pringle, who had to take an emergency family leave.

Cardona, former De La Salle University standout, made his first appearance in the league since last year when he was hospitalized after a reported overdose. He played for Zark’s Burgers in the PBA D-League last July before signing with the Batang Pier for the season-ending conference.

The 35-year-old swingman wound up with 4 points in 8 minutes of action against his former team NLEX.

The Road Warriors, who came off a huge victory against the San Miguel Beermen, have now clinched their 7th win in 9 games.