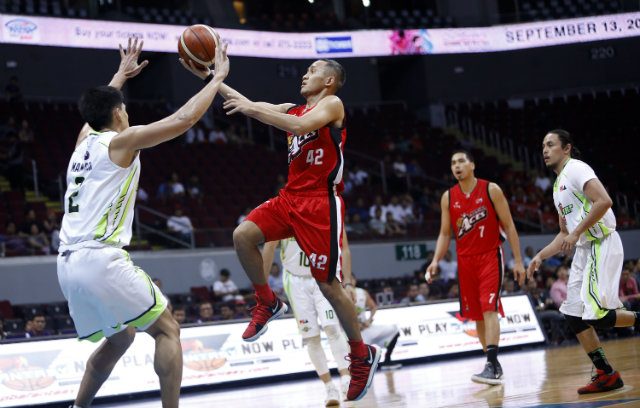 Facebook Twitter Copy URL
Copied
After shaking off a lengthy slump, the Alaska Aces have now made it two victories in a row

MANILA, Philippines – After shaking off a lengthy slump, the Alaska Aces have now made it two victories in a row after defeating the GlobalPort Batang Pier, 101-88, in the 2017 PBA Governors’ Cup on Friday, September 8 at the Mall of Asia Arena in Pasay.

The two squads kept it close throughout the match, with Alaska only pulling away after a quick 5-0 run to start the final frame.

The Aces dominated the paint with reinforcement LaDontae Henton leading the way. He logged in a game-high 36 points and tracked down 21 of Alaska’s 60 boards in the game, while GlobalPort listed 44.

Calvin Abueva and JVee Casio also finished in double digits with 12 and 11, respectively.

Comebacking Mac Cardona earned the starting nod and likewise delivered 12 points on 5-of-6 shooting to go with two rebounds and two assists.

GlobalPort star Terrence Romeo was meanwhile held down to only 5 points on 2-of-9 shooting in almost 27 minutes of action.

The Aces were coming off an impressive win – their first since April – over the San Miguel Beermen, which in turn also snapped a franchise-worst 14-game losing skid.

With back-to-back wins, Alaska is now at 2-6, while GlobalPort sinks to a 3-5 slate. – Rappler.com