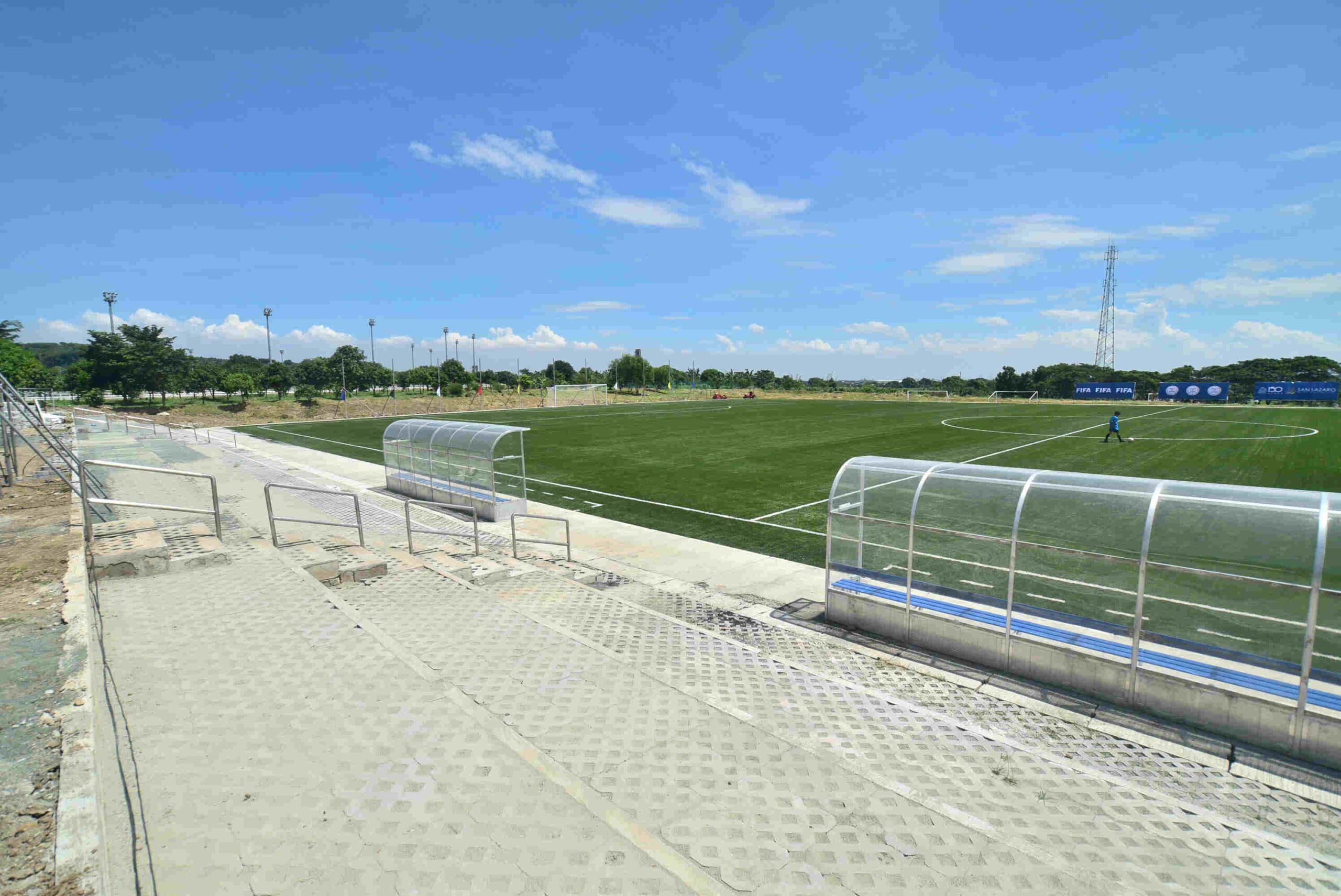 Facebook Twitter Copy URL
Copied
The field within the San Lazaro Leisure Park will be part of a national training center.

MANILA, Philippines – “This is a great day for those of us who love football,” said Philippine Football Federation President Mariano Araneta last Saturday when the pitch of the upcoming National Training Center was formally unveiled in Carmona, Cavite.

“We thank Manila Jockey Club for their magnificent generosity for making the land available,” added Araneta. The football field sits on land belonging to the Manila Jockey Club in Carmona that includes a racetrack just a stone’s throw away.

The football field is finally ready for play after some delays. The construction of the pitch was first reported by Rappler a year ago.

After Saturday’s launch two matches were held, a friendly scrimmage between the DLSU and UP Women’s teams and an official match of the Ang Liga collegiate preseason tournament between San Beda and Ateneo. The Red Lions prevailed 3-0. The pitch uses a surface from ATC Global, a FIFA accredited supplier from the United States. The dimensions of the field are 105m by 68m, the size that the football governing body prefers for its high-level matches.

The pitch is nestled inside a very gentle slope, and cut into the incline on two sides are ledges for seating. There are 4 rows along the sideline. According to MJC’s Marketing officer Mikki Cardenas, there is room for about 1,000 to 1,200 spectators. Fencing and lighting is planned to be completed by next year.

It is believed that this field is one of only 3 105 by 68m synthetic pitches in and around Metro Manila, with the FEU Diliman facility and Rizal Memorial being the other ones. All the other regulation pitches, especially those around running tracks, are smaller but still within the minimum 100 by 64m for elite senior play.

There is a simple modular locker room beside the pitch for player, with plans for expansion.

Could the Carmona facility host a PFL club? “Why not?” Said Gastanes last Saturday. There would have to be extensive improvements made before that would happen. AFC Club Licensing regulations require a minimum strength for the lights, a certain number of numbered seats, and such accoutrements as a media room.

Meanwhile the pitch will be utilized by the Youth Football League as early as next week for its games.

But the pitch is only part of the plans to make the training center a footballing hot spot. Two other small-sided pitches will be made beside the artificial one. And within the racetrack two full-size grass pitches will be readied.

There already is football being played within the racetrack but according to Eduardo Ramirez De Arellano, marketing VP of MJC, the surface there will be completely redone starting October with new drainage and base underneath. MJC officials say they will study the best practices of other top grass fields in the Philippines in order to maintain their fields well.

One of these grass pitches will be funded by PFF and the other by MJC. De Arellano says the work must be completed by March in time for the Manila 10s rugby tournament.

Having one artificial field and another grass one will be ideal for the PFF. It can help its national teams prepare for whatever surface they will be playing in.

Last Saturday ground was also broken for the construction of the PFF’s new headquarters, which will replace the House Of Football in Pasig. The four-storey structure will occupy a strip of land beside the road that leads from the racetrack to the artificial field.  There will also be a dormitory for teams who wish to stay at the center for training camps. There is one poignant note to this new pitch. Nathan Mazo was the marketing head of MJC. The former La Salle Green hills player was on the forefront of the club’s drive to be a football mecca. But Mazo tragically perished in a surfing accident last December. He was 35.

“I would have loved to see this go through with him,” says De Arellano. – Rappler.com