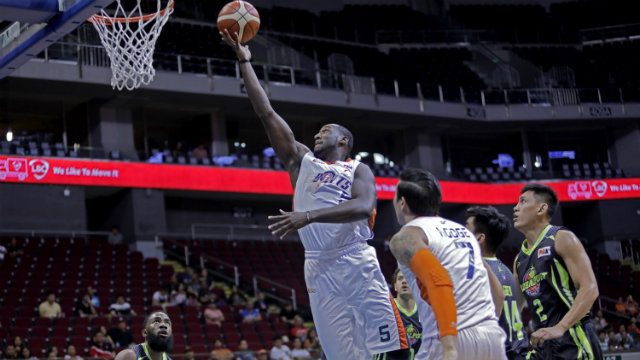 MANILA, Philippines – Allen Durham dropped a triple-double to help the Meralco Bolts fend off a late Globalport Batang Pier rally, 100-93, and inch closer to a spot in the top 4 and the twice-to-beat incentive that comes with it in the 2017 PBA Governors’ Cup at the Mall of Asia Arena Friday, September 22.

Down 70-91 midway the fourth, Globalport trimmed its deficit to single digits, 91-100, with 40 seconds remaining behind the heroics of Sean Anthony but it was not enough as Meralco built a lead large enough to secure its eighth win of the season.

“These are the toughest games to coach. I would actually prefer that they have an import because at least my players would not be so relaxed but a win is a win, it wasn’t very pretty but we got it,” said Meralco coach Norman Black.

Durham dropped 22 points, 22 rebounds and 10 assists while Chris Newsome had a steady outing of a game-high 28 points on top of 7 rebounds and 5 assists.

The Bolts led by just 9 points after the first half, 51-49, before breaking the game wide open as Meralco entered the fourth quarter with a comfortable 83-64 lead thanks to Durham, Newsome and Cliff Hodge who combined for 18 of the Bolts’ 33 third quarter points.

Meralco dominated the rebounding and assists department after finishing with 55 boards and 28 assists compared to the Batang Pier’s 38 rebounds and 15 assists.

Sean Anthony paced Globalport, which ended its campaign with a 3-8 record, with 23 points and 13 rebounds.

Meralco improved to 8-2 and it needs Ginebra, which also has an 8-2 card, to win its game tomorrow for the Bolts to secure their spot in the top 4.