At U.N., Cayetano bloats number of drug users to 7 million

Sep 28, 2017 4:50 PM PHT
Paterno Esmaquel II
Facebook Twitter Copy URL
Copied
If Secretary Cayetano is to be believed, this means President Duterte's drug war is failing, because the number of drug addicts has doubled since he took office 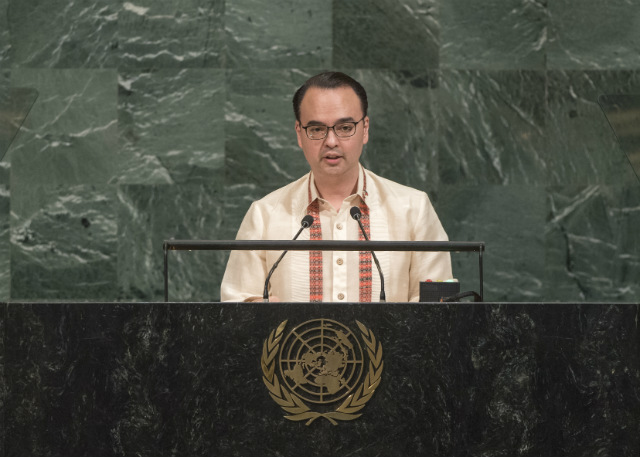 “It’s estimated that 4 to 7 million people have been using drugs or are becoming dependent on drugs. Where is sovereignty in a country where vast numbers are addicted to drugs and enslaved to their suppliers?” Cayetano told the UN General Assembly on Saturday, September 23.

Cayetano repeated this figure after a meeting with US Secretary of State Rex Tillerson on Wednesday, September 27.

“In the 25 years that I have been in public service, I have seen statistics from various sources placing the number of drug users and dependents from as low as one million to as high as 7 million,” Cayetano said in a statement after meeting with Tillerson.

If Cayetano is to be believed, this means that in a room of 100 Filipinos, 7 could be drug users.

This also means Duterte’s war on drugs is failing, because the number of drug addicts has doubled since he took office, despite the deaths of more than 14,000 people in both police operations and vigilante-style killings.

Bolivar pointed us to Cayetano’s statement after his meeting with Tillerson. In this statement, Cayetano said of his estimates: “Although the statistics, the classification of users, and the methodology used vary, they all still point to the seriousness of the illegal drug problem in the Philippines.”

Cayetano’s claim is baseless, however, as far as the latest report from the Philippine Drug Enforcement Agency (PDEA) is concerned.

Just in May, PDEA pegged the number of drug users at 4.7 million.

How PDEA came up with this figure was already questionable, but the government ended up adopting this figure. It was, after all, closer to Duterte’s own estimates. (READ: Is Duterte’s ‘4 million drug addicts’ a ‘real number’?)

When he was campaigning in late 2015, Duterte pegged the number of drug addicts at 3 million.

Then, in his first State of the Nation Address in July 2016, he presented a new estimate of drug addicts – 3.7 million.

In contrast, the Dangerous Drugs Board (DDB) in an earlier survey estimated the number of drug users at 1.8 million.

The DDB chairman until May this year was Benjamin Reyes.

Duterte ended up firing Reyes as the DDB maintained its 1.8-million figure. “You do not contradict your own government,” the President said.

Punongbayan explained that based on the margin of error of the 2015 DDB study, the “most liberal estimate” is that the Philippines has 2.47 million current drug users.

The economist warned that “an overestimation could easily be used to justify an extension of the bloody drug war up to the President’s last day in office.”

“Second,” Punongbayan said, “if the President now disputes the drug user data, what other statistics could he dispute later?”

“The pages of history are replete with despots who rose to power by altering the facts and gaslighting their citizens,” he said.

“In the end, a tighter grip on reality – through data and evidence – may be one of the best ways to brace ourselves against this new, rising wave of authoritarian rule.” – Rappler.com