Sep 30, 2017 12:57 PM PHT
Agence France-Presse
Facebook Twitter Copy URL
Copied
Deputy commissioner Mark Tatum suggests that teams make an effort in their first home game to address the current political climate by having players and coaches give a pregame address to their fans 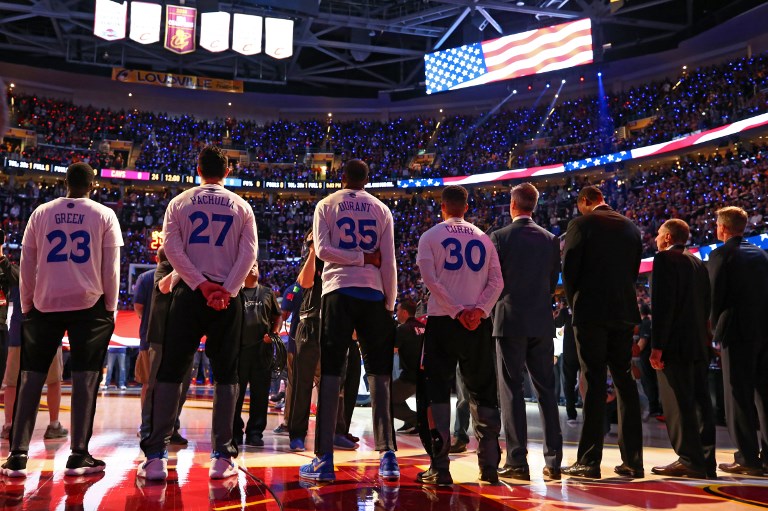 NEW YORK, USA – The National Basketball Association sent a memo late Friday, September 29 to all 30 teams instructing players to stand for the US national anthem, and warning teams there won’t be any exceptions.

The memo, from deputy commissioner Mark Tatum, said the league has the discretion to discipline players who violate a rule already on the books stating that they must stand for the anthem, broadcaster ESPN reported.

The memo tells teams that “the league office will determine how to deal with any possible instance in which a player, coach, or trainer does not stand for the anthem.” It adds that individual teams “do not have the discretion to waive” the rule.

In the memo, Tatum suggests that teams make an effort in their first home game to address the current political climate by having players and coaches give a pregame address to their fans.

“This could include a message of unity and how the team is committed to bringing the community together this season,” said the memo, a copy of which was obtained by ESPN.

Tatum’s memo comes 24 hours after commissioner Adam Silver said at the league’s board of governors meeting in New York that he expects players to stand for the national anthem.

Last season, NFL quarterback Colin Kaepernick began kneeling during the national anthem as a way of protesting racial injustice and police brutality in the United States.

Previously only a handful of players had been taking a knee during the anthem, but on Sunday – two days after President Donald Trump’s inflammatory comments directed at players – nearly 200 chose to make their point, including the Pittsburgh Steelers American football team, all of whom remained in the locker room except for one player. – Rappler.com