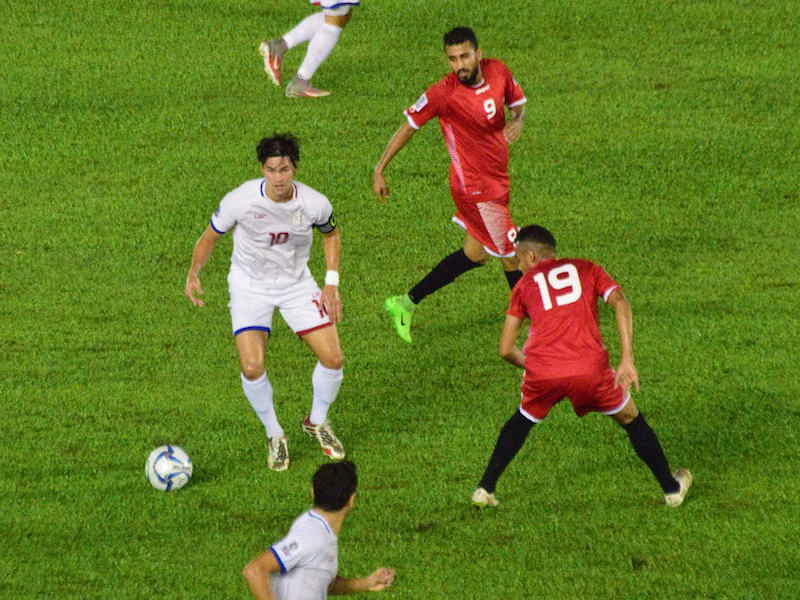 MANILA, Philippines – The road to the AFC Asian Cup UAE 2019 takes the Philippines to Doha, Qatar, on Tuesday, October 10, for a massive Group F qualifier against Yemen. It will be the second match in a row that the two sides will meet in a qualifier. Last month the Pinoys were held to a 2-2 draw in Bacolod.

The game will kick off at 6 pm local time, or 11 pm Philippine time. A source in the team says a TV broadcast is possible but not yet sure. Last month’s home game was aired on TV5. Let’s hope that a livestream, at the very least, will be available for fans.

Only two of the four sides in the double round-robin group punch their tickets to UAE in two year’s time. After three matches the Azkals are atop the standings with two wins and a draw for 7 points. Yemen is in second with two draws and a win for 5 points. Tajikistan is at 3 points while Nepal is holding up the table with a point after drawing Yemen at home.

In the other game on Tuesday, Nepal travels to Tajikistan.

The game is considered a home game for the Yemenis even though it will be played in Qatar. The civil war raging in Yemen makes it impossible for international matches to be held there. This will be the second time the Azkals will face this opponent in Qatari soil. Two years ago the Philippines beat Yemen, 2-0, in Doha in World Cup qualifying.

Once again coach Thomas Dooley is dealing with injury concerns. Striker Misagh Bahadoran hurt his shoulder playing in a PFL match against Ceres and will not play on Tuesday. Javi Patiño, Amani Aguinaldo, Camelo Tacusalme, and Luke Woodland, who damaged his knee in the September game versus Yemen, are also not going to make it because of injury. A reprise of the Dennis Villanueva/Carli De Murga pairing in central defense is likely, although Simone Rota might also play in that spot.

Dominic Del Rosario, a left-sided full back now with Global, makes a return to the squad, as does FC Meralco Manila’s Curt Dizon, who is back after a three year absence from the team.

Stephan Palla is also coming over from Austria as is Daisuke Sato, who stayed with his club in Denmark in the last FIFA window because he was suspended on yellow cards. Sato will compete with Palla for the left back spot for sure.

There are two new call ups: Sean Kane, a Filipino-American midfielder from JPV Marikina, and Jesus “Jhan-Jhan” Melliza, a striker from Stallion Laguna.

Melliza is having a banner season in the PFL. At one point his 13 goals was best in the league, although he has since been overtaken by Kaya’s Ghanaian goal-poacher, Jordan Mintah. He remains the most prolific Filipino scorer in the league, an incredible statistic considering all of the overseas-born Filipino firepower present in the PFL.

The La Paz, Iloilo, native who came over from Green Archers United is a big reason that Stallion still has a decent shot at making the PFL playoffs despite a horrible start. Melliza may not be the tallest striker but he has decent pace, a stocky, powerful build, and has a left foot that can be either a cannon or a surgeon’s scalpel, depending on the situation.

No doubt the injuries to Bahadoran and Patiño have made the former FEU Tamaraw’s selection even more of a no-brainer.

“I want to give them a chance to show what they have to offer. Maybe they will surprise me,” says Dooley of Kane and Melliza.

“They have to give the best they have in training. They need to show they belong in the national team,” added the German-American coach.

Harry Föll, who was in the squad for the Yemen game in Bacolod, is also back in the roster. The 19-year old mid is in the Hansa Rostock second team in the German third tier.

Dooley has the personnel but his main concern seems to be player fatigue. The coach says the team rests and recovers from jet lag on Wednesday, then trains on Thursday and Friday before resting again on Saturday. Training resumes on Sunday and Monday. The team management decided against playing a friendly in Qatar before the qualifier to keep the workload manageable.

The compressed schedule of the PFL, plus AFC Cup commitments for Ceres players, has really put plenty of miles on the odometer for many Azkals. Global Cebu also reached the final of the Singapore Cup after beating Hougang in the semis, so that means one more away match before the year is over.

Dooley is also wary of a Yemen side that is looking to repeat the shock 1-0 upset over the Pinoys in Rizal Memorial from 2015. The Philippines coach says Yemen look shaky at the back but are lethal in attack, naming Alaa Al-Sasi and Abdulwasea Al-Matari as threats.

“If we had 3 weeks of preparation, I have no doubt that we could get the victory,” says Dooley, who, like all national team coaches, has difficulty getting his players together outside of FIFA windows.

“We just have to find a way to win and play smart.”

“We need to have better transition from offense to defense. We had problems in this area that we have to address.”

Once again the coach says the heavy workload with the clubs affects them in this respect.

“When they are tired as well as mentally tired, it’s difficult to react quickly.”

A win on Tuesday and the Azkals will go to 10 points, at least 4 points clear of Tajikistan if the Central Asians win as expected against Nepal. That will put us in a commanding position with two matches to go, a road trip to Nepal in November and a home match against Tajikistan in March.

A draw is not bad. It still leaves us a minimum of two points clear of both Yemen and Tajikistan. But a loss would hurt. In that eventuality Yemen would overtake us for leadership in the group and put immense pressure to get three points in November. No doubt the Philippines would love to have qualification sewed up before the March showdown with the Tajiks.

Nepal could do the Philippines a big favor by getting a draw against the Tajiks. That would leave Tajikistan stuck on four points. A Nepal win is also not bad, but will create some wind in the sails of the Himalayans going into the match in Kathmandu against the Philippines.

The stakes are high, but Dooley feels that the team itself, and not the opponents, are the biggest stumbling blocks to victory.

“The only ones who can stop us from qualifying are ourselves. If we take care of the details, 100% we qualify,” asserts the coach.