Oct 4, 2017 6:49 PM PHT
Beatrice Go
Facebook Twitter Copy URL
Copied
Despite the loss, Alvin Pasaol breaks Jeff Napa's record of 43 points in one game with 49 points of his own 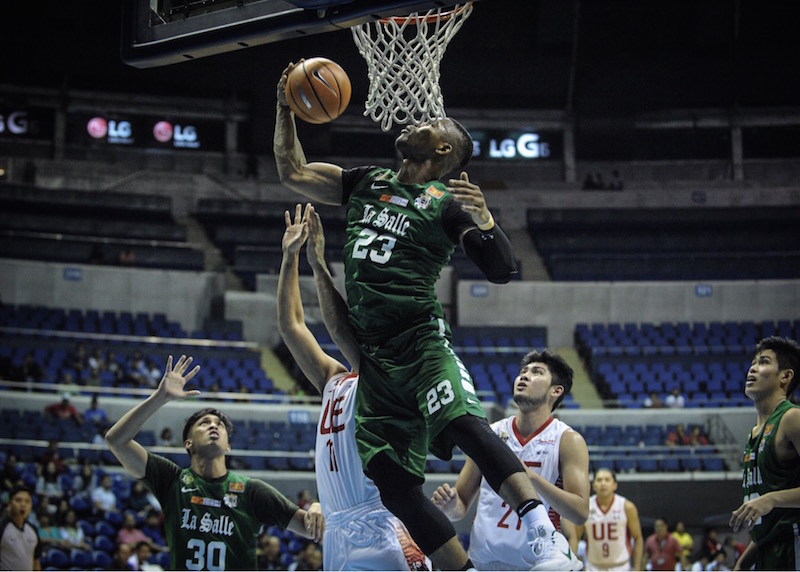 Despite the loss, Alvin Pasaol came up big for the Red Warriors, attaining UAAP-high of 49 points since 2002, beating Bulldog legend Jeff Napa’s record of 43 points in a single game.

Montalbo drew first blood by sinking a triple in the first 10 seconds of the game, but Pasaol powered the Red Warriors by going back-to-back to bring the score to a tie for the first time at 15-all.

The Red Warriors were able to earn a one-point lead in the game via Nick Abanto’s charities, but the Rivero brothers handed the lead back to the Green Archers.

Although the Green Archers ended the first half with a double-digit lead, Pasaol already tallied 24 points by the end of the first half.

The second half saw the Green Archers almost blow out the winless Red Warriors. However, a hot Pasaol led the Red Warriors’ 4th quarter 23-4 run that saw them lose to the defending champions by only 6 points.

Ben Mbala topped another personal season-high of 39 points, 15 rebounds, 2 assists and 1 steal. Abu Tratter followed with a double-double of 24 points and 10 rebounds.

Aside from registering 49 points, Pasaol grabbed 8 rebounds and made 4 steals. Philip Manalang backed him up with 14 points, 9 assists and 2 steals.

This win puts the Green Archers at a 5-1 record, while the Red Warriors are still winless at a 0-6 record in the UAAP Season 80 men’s basketball tournament.